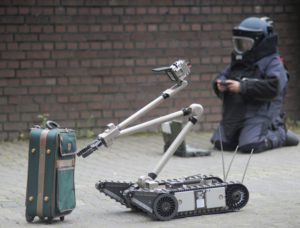 Abandoned items of luggage are frequently found at airports and train stations. This is a case for the emergency services, who have to assume that these items might contain bombs. They must assess the potential threat quickly, avert any possible danger, and preserve evidence for criminal proceedings. In the future, police will have the support of a remote-controlled sensor system as they go about their duties. Fraunhofer researchers are developing this sensor suite in cooperation with industry partners and criminal investigation authorities.

Anyone who forgets their luggage in public places, airports or train stations will spark off a large-scale police operation. Time and again, suitcases, bags or backpacks left lying around unsupervised cause a bomb alert. Admittedly, most abandoned luggage items turn out to be harmless. But in the first instance the emergency services have to proceed on the assumption of possible danger and check whether they are dealing with an improvised explosive device (IED) that might blow up at any time. This involves getting up close to the luggage to inspect it. A system that makes it possible to assess the danger of the situation quickly – and also records 3D images of the contents and shape of the luggage as well as of the surrounding area – would make the specialists’ work considerably easier, speed up the reconnaissance process, and minimize the risk for the emergency personnel.

Since November 2014, researchers at the Fraunhofer Institute for High Frequency Physics and Radar Techniques FHR in Wachtberg have been developing such a system together with the North Rhine-Westphalia State Office of Criminal Investigation, the Leibnitz University in Hannover, ELP GmbH and Hentschel System GmbH. The German Federal Office of Criminal Investigation in Wiesbaden and the German Federal Police Force are supporting the project as additional expert consultants. The German Federal Ministry of Education and Research is funding the USBV Inspector project with a grant of two million euros as part of its Research for Civil Security program.

Emergency services do not have to enter the danger zone
The system the researchers have developed comprises a multimodal sensor suite consisting of a millimeter wave scanner, a high-resolution digital camera, and a 3D environment monitoring system. The components are contained in a housing and mounted on a robot platform. Bomb disposal engineers remotely control the robot from a safe distance. Its swiveling 3D sensors make a three-dimensional survey of the crime scene, and the digital camera provides high-resolution images for later optical evidence preservation. Meanwhile the millimeter wave sensor scans the source of danger and creates an image of what’s inside. A built-in embedded PC on the robot collects the data and sends it to the investigators, where it will be merged on the computer by means of sensor data fusion.

Three-dimensional survey of suitcase bomb contents
“Up to now our techniques have not allowed us to form a 3D outline of suitcase bombs, and it has been impossible – or only partially possible – to make a spatial map of the contents. With the sensor suite we can visualize in three dimensions what’s inside a luggage item, and so determine the composition of the bomb and how the parts are arranged in the luggage,” explains Stefan A. Lang, team leader at the FHR and the project’s coordinator. This lets the explosives experts quickly assess the threat, and going forward they will also be able to preserve as much evidence as possible about the bomb. Until now, specialists were often forced to destroy suitcase bombs – making it difficult to identify the perpetrators. Other advantages of the contact-free detection system: it is light, compact, and platform independent, which means it can be mounted on any robot.

Within the project, the FHR researchers are developing the millimeter wave scanner (also referred to as a radar sensor) for fast reconnaissance. This scanner allows a very high depth resolution. “For the radar we make use of the synthetic aperture radar, or SAR, principle, by which the sensor is moved along a trajectory, a kind of track – from left to right in front of the case, for example – and the Doppler information generated in the process is used to create an image,” explains Lang. Apart from the research work on the sensor, the expert and his team are also looking into ways of determining the optimum trajectory for surveying an object. This depends on the shape of the luggage item or container, its position in the environment, and the position of the robot.

A radar sensor demonstrator will be ready in April 2016. Extensive field tests of the remote-controlled sensor suite begin in the middle of 2017, with the multimodal sensor suite set to be launched in 2019.