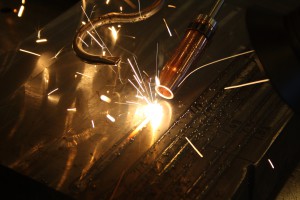 We are analysing how the laser beam oscillation while welding allows attaining several productive and qualitative advantages.

The laser beam welding is a well-consolidated junction technique in industry and provides some advantages compared to competing junction technologies, such as high productivity, the possibility of welding without weld material and the limited heat input, which results in smaller thermally altered zones and limited thermal distortions. Besides, the nail-shaped bead, attainable when you generate a keyhole allows reaching conditions of deep material penetration, without having to widen the bead; finally the geometrical configurations that can be welded are manifold indeed, also thanks to the limited requisite of accessibility to the junction zone. There are however also some problems, which create some difficulties in dealing with the laser welding: the edge preparation and, in particular, the limited required gap are certainly much felt issues in industry. Such characteristics must be kept under control to grant a correct fusion of both edges, due to the small size of the laser beam. We cannot consider the extension of the laser beam through its defocusing a valid solution for the gap problem, apart from very particular cases, since the consequent reduction of power density would lead to weld by conduction and not in deep penetration. The problems of conduction welding, typical of conventional junction techniques with low power density, implies a widening of the bead and a sudden reduction of the maximum attainable penetration. Moreover, the problems connected with the heat conduction in the component welded with this modality give birth to defects, such as a big-size thermally altered zone and serious thermal distortions. The solution that is instead proposed consists in providing the laser beam with a further motion, in addition to the welding path one. 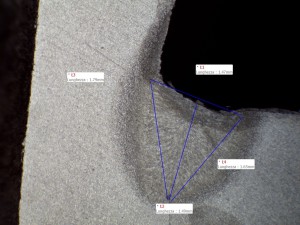 frequency oscillation of the laser beam, in the order of some hundred Hz, implies the generation of an apparent spot laser, characterized by a bigger incident size on the material surface than the nominal size of the laser beam. The characteristic geometrical parameters of the secondary path of the laser beam are the minor and the major axis of the ellipse (respectively indicated by d and D in figure 1).

USE ADVANTAGES
Depending on the ratio between feed speed and oscillation frequency of the laser beam, we can obtain continuous or discontinuous beads along the main path of the laser beam (feed motion). In fact, high oscillation frequency values lead to a neat superimposition of the laser beam during its oscillation, resulting in a partial material re-melting and therefore generating a continuous bead along the feed axis. On the contrary, high welding speeds determine a bigger distance between the material portion melted from a passage of the laser beam to the successive one; consequently, the laser re-melting is much more limited and the risk is of having a not perfectly continuous bead along the main welding path (that is to say, along the feed motion). This variable implies, at least theoretically, different thermal damages, such as the thermally altered zone and thermal distortions. The welding joint attainable with this technique maintains the high penetration of the welding in keyhole and it shows also the benefits of a bigger width of the zone involved in the junction of material edges. An example of application of such welding technique concerns the case of junction of elements with access from one side only: the wobbling technique becomes of notable interest, especially when there are not well controllable problems of variable gap. The figure 2 shows a micrograph of a joint welded by fibre laser with wobbling technique. The laser beam oscillation involves the generation of a molten puddle with bigger width, which favours the junction in more repeatable way and with minor gap preparation costs.

FIBRE AND WOBBLING, IDEAL PAIR
From the laser system point of view, we can state that the fibre laser source, currently used for the laser welding with a single motion along the welding direction, can be used in the wobbling configuration, too. This means that the investment demanded to gain access to the laser beam oscillation technique is manly connected with the focusing head while from the technological point of view the process parameters to be added to those to be controlled, compared to the conventional process, are the path of the laser beam motion and the oscillation frequency. From the productive point of view, the application of this laser welding technique might limit the need of monitoring and control systems of the molten puddle, due to the minor criticality on the small size of the laser beam. Besides, the oscillation of the laser beam allows increasing the tolerance interval required for the gap preparation among the parts, very critical aspect in laser welding. Finally, the microstructure attainable in the joint in the heterologous welding, that is to say carried out among dissimilar materials, might show a higher uniformity of chemical composition; in fact, the oscillation of the energy beam is a technique that is generally applied in re-melting systems, mainly with electronic and plasma beam, in order to increase the material uniformity.