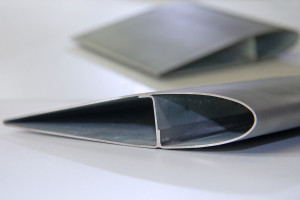 Researchers at the Fraunhofer Institute for Machine Tools and Forming Technology IWU in Chemnitz are studying  metal, and especially steel, as a blade material. In smaller installations, the greater weight of the steel blades is inconsequential; as installations get larger, light alloys can be used to keep blade weight down. Collaborating with colleagues from the Free University Brussels (VUB) in the HyBlade project, Fraunhofer IWU is developing the required aerodynamics as well as the necessary manufacturing process chains. Manufacturing steel blades offers numerous advantages. “First, it makes turbines significantly more ecological, since more than 90 percent of the steel can be recycled – so using metal rotor blades makes wind power truly environmentally friendly,” explains Marco Pröhl, a researcher at the IWU. “What’s more, compared to similar blades made of fiber-reinforced plastic, the cost of rotor blade mass production drops by as much as 90 percent – and the blades can be manufactured more accurately.”

Metal blades can also be produced more quickly. Provided that processes are run in parallel – for instance, that a new metal sheet is fed into the production line as soon as the first blade has completed the first process step – then a completed rotor blade rolls off the conveyor belt roughly every 30 seconds. With fiber-reinforced plastics, the same process usually takes several hours.

The primary cause of these differences lies in the manufacturing process. Fiber-reinforced plastic blades often require significant manual processing: first, a suitable mold has to be made for the blades. Depending on the production variant, workers layer fiber mats in this mold, inject resin, and leave the component to harden for several hours in an oven. This produces two half shells; once their edges have been trimmed, the halves can be glued together. These steps can be performed simultaneously, as in sheet metal blade manufacturing – but that doesn’t make them any quicker. It would take dozens of installations running in parallel to produce plastic blades at the same rate as metal ones.

In contrast, it is easy to automate the manufacturing metal rotors: the processes are similar to those in the auto industry, which means they are suitable for series production. The researchers start with a flat sheet of metal, which they fold using a bending die to give it a typical blade shape. Next, they laser weld the edges to form a closed profile. After placing the preformed piece in a tool with the desired final shape, the researchers then pump a reusable water-oil mixture into the interior of the blade and put it under several thousand bars of pressure. This is equivalent to the pressure experienced underwater at a depth of many thousands of meters. This effectively inflates the blade, giving it its final form. “The fact that we’re shaping the blade from the inside out lets us compensate for any inaccuracies in previous steps,” explains Pröhl. “The geometry ends up perfect after the first production step, with the blades matching the flow profile milled into the tool to within 0.1 millimeters.”

The researchers have already produced a blade 15 centimeters wide and 30 centimeters long, using it to optimize the individual processing steps. Their next step will be to produce an entire rotor for a vertical axis turbine with 2.8-meter-long blades and a diameter of two meters. Once it is installed at a test site for small wind turbines on the Belgian coast, it will be put through its paces.