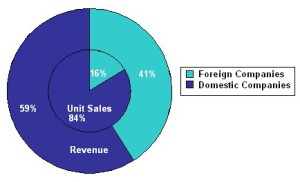 According to a market report recently pushed by GCiS China Strategic Research, the 2013 total domestic market for CNC metal-cutting machine tools, excluding exports, is estimated at RMB 90.2 Bn, with over three quarters of this revenue coming from sales of CNC machine centers and lathes. The market is fairly consolidated, with the top 10 suppliers accounting for approximately 44% of domestic revenue. From the report findings, it is clear that thre is a considerable gap continues to remain between foreign and domestic supplier offerings, and foreign companies are gaining market share in most product segments even though the majority of customers currently have sufficiently low requirements which domestic suppliers are able to address.

Meanwhile, most foreign suppliers are able to command higher prices on their products, particularly CNC machining centers, lathes and grinders because the technological requirements for these products are higher. Among these three segments, foreign suppliers take up the majority of the CNC machining center and grinder markets, since there are fewer low-end products that can match the capabilities of the high-end products, whereas in terms of usage lathes can get away with a sliding quality scale, and most lathes are manufactured and sold by domestic companies. There is a huge difference in quality between these products, and “imported” is often treated as a synonym for “high quality” in all CNC machine tool segments, although differences in quality vary in importance across different segments. CNC machining centers and lathes are offered in the widest price and quality range, with premium grade foreign products costing hundreds of times more than a locally produced alternative in some cases.

The CNC machine tool market has been disproportionately affected by the relatively recent economic downturn, given the fact that most manufacturers within the various downstream industries have been operating below optimal output capacity rates and have not had the flexibility to experiment with new product lines in recent years. Based off of GCiS’ findings, of the 6 target product segments only CNC grinder sales grew significantly in 2013, with 4 product segments experiencing negative growth. As the economic climate picks up and manufacturing begins to climb, it will take some time for the various downstream industries to reach optimal output capacity, and overall there will therefore be a lag between the initial growth in China’s overall manufacturing rates and new sales of CNC machine tools.

The current market situation is lukewarm for Chinese companies, although prospects are brighter for foreign companies, largely due to declining demand for lower end CNC machinery as a result of China’s slowing manufacturing sector and a policy re-calibration towards higher end production. While competition is the fiercest in the low end market, most companies with the ability to invest in additional R&D or enter technological partnerships with overseas enterprises will do so, as the vast majority of suppliers who only sell low end products are experiencing drastic negative growth. CNC machine tools with limited applications will be substituted by more complex CNC machine tools capable of automated tool swapping and workpiece loading and distribution, and smaller companies which manage to survive the transition will largely do so by offering highly specialized products.

Rather than insulating domestic suppliers, the Chinese government has opted to loosen import regulations for many forms of technologically advanced products in the interim, and domestic companies will struggle to catch up and surpass foreign suppliers occupying the high end market. While foreign suppliers will be able to enjoy relatively favorable policies, the aim of these policies is ultimately to elevate the technological prowess of domestic enterprises through technological diffusion and exposure. As a result, foreign suppliers will continue to hold a major advantage at the high end of the market for many years to come, but domestic suppliers will gradually increase their standards and technical expertise, bringing them closer to their international competitors in terms of quality.