Metal-removal rates during roughing and heavy-duty machining operations are crucial for the productivity of the machining operation. To improve these rates, German machine tool builder Heller, whose U.S. headquarters are located in Troy, Michigan, focused on the importance of the toolholder. Using special shrink-fit chucks from Haimer USA (Villa Park, Illinois) with drive pins and spiral grooves in the tool shank to secure the cutter/holder interface, the company performs high-feed slotting ranging to 2×D (50 mm) in difficult-to-machine materials.

Especially within the aerospace, energy and mechanical engineering sectors, production managers must bridge the gap between economic efficiency and high process reliability when working with materials that are difficult to machine. Heller, which produces four- and five-axis CNC machining centers, CNC mill-turns, CNC machines for crankshaft and camshaft machining, and flexible manufacturing systems, says it relies on close collaboration with its customers, suppliers and research institutes to meet ongoing demands in manufacturing. Often, the aim is to increase productivity without compromising process reliability.

“We often achieve this aim with an optimized roughing operation that ultimately results in a reduced finishing process. By maintaining the same technological values, but shortening the finishing depth of cut by 50 percent, the overall machining time is reduced to half. However, this requires process reliability and controllable systems during roughing,” says 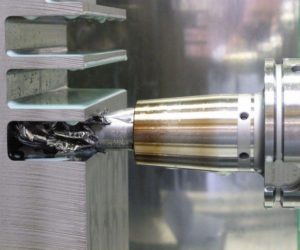 All machining components in the process chain must be considered to improve productivity, he says. The machine tool is the most evident component of the machining process, however, the tool, the toolholding system, the coolant supply and other elements are also essential for a successful operation. “In the end, the weakest link of the process chain limits the success,” Mr. Kirsten says.

For many shops, this weakest link is often the toolholder. In the case of reinforced shrink-fit chucks, however, the vibration node is closer to the bearing point (due to the larger mass). The result is a smoother machining process with less vibration and a better surface finish quality while using the same tool, machine, process parameters and fixturing technology.

Heller conducted an extensive milling application study in titanium Ti-6Al-4V for a group of representatives from the aerospace industry, the Technical University of Dortmund and Technical University of Hamburg-Harburg. The study used a four-axis Heller H 5000 with a gear unit and HSK-A100 spindle, which yields torques ranging to 2.290 Nm, and different 25-mm-diameter end mills to mill full slots into a titanium plate. To simulate holder conditions in aerospace applications, the tools were clamped into reinforced shrink-fit chucks. At an axial cutting depth of 0.5 to 1.0×D, the machining process was found to be very reliable, Mr. Kirsten says. However, after increasing to a full slotting depth of 2×D, the tool pulled out of the shrink-fit chuck, creating a slot closer to 2.5×D as it progressed through the part. Toward the end of the slot, the tool finally broke due to increased cutting forces, he says.

In this case, the clamping force of the chuck was the limiting factor, he explains. As soon as the axial pressure and process-related vibrations were too high, the tool moved out of the chuck and further into the workpiece. At the same time, the cutting pressure increased, the tool broke and the workpiece was damaged. Mr. Kirsten says that the reason for this pullout was that the tools were forced to n 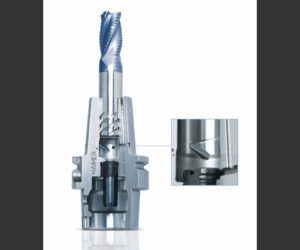 avigate toward the spindle when the holding forces were exceeded.

That is where the Haimer Safe-Lock system comes into play. In addition to frictional clamping forces, the system has the same helix pattern as the tool. Theoretically, even if the tool got loose while using Safe-Lock, it would be pulled into the holder through the helical drive keys and not into the part—a movement that could easily prevented using length presetting screws, Mr. Kirsten says.

To test the Safe-Lock system, the Heller technology developer repeated the trial, making some major changes. Haimer Safe-Lock grooves were added on similar solid carbide tools, and the application was run again with a reduced spindle taper interface (HSK 63 instead of HSK 100); a less-rigid five-axis, gear-driven spindle; and a less-stable diagonally fixtured workpiece.

Despite these additional limiting factors, the tool could process a full slot of 2×D (50 mm) with complete process reliability, Mr. Kirsten says. “This way, we were able to indirectly prove that Safe-Lock works and that the shrinking technology has even more potential with HSK-A100, especially on five-axis machining centers with gear spindles.”

According to Mr. Kirsten, this is a reliable process for roughing operations. He considers the Haimer Safe-Lock system a practical, easy-to-handle and process-reliable addition to the shrinking technology, which Heller already utilizes with standardized tools of other manufactures.

According to Haimer, the Safe-Lock system is moving toward becoming a standard for heavy machining and roughing, and more and more companies that make use of the trochoidal (dynamic) milling strategy are also making the switch to Safe-Lock holders to prevent pullout.