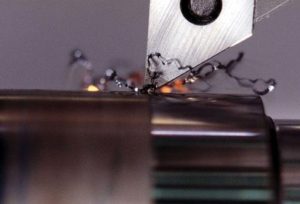 Current cutting-edge tool can essentially eliminate harmonics, allow for double the machining feed rates and deliver twice the tool life to maximize overall metal removal processes. Modern cutting tools are so effective that, in many instances, a machine tool spindle’s power and speed capabilities are what hold the tools back and hinder their performance.

Metal removal rates are the driving force behind many of the innovations in the manufacturing industry. Shops stay competitive when they incorporate new ways to increase the amount of metal they can cut through within every hour. To that end, cutting tool suppliers developed what are known as variable geometry cutting tools as far back as 15 years ago. Unfortunately, tool grinding technology at the time was not advanced enough to further develop and optimize them.

That has since changed, and today’s tool grinding systems are much more capable and precise. As a result, the variable geometry concept has advanced significantly to a variation developed by Niagara Cutter called the continuously variable asymmetric flute geometry. The geometry is found on the company’s new Stabilizer 2.0 solid-carbide end mills.

Each cutting edge varies from front to back and differs from the one next to it. Plus, each of the tool’s four flutes are spaced at different degrees from one another instead of evenly at 90° apart. The helix, radial relief, radial clearance and indexing are all varied. And, any given point along the cutting edge of each flute is different from another point on that same flute as well as being different from any points on the other three flutes.

Additionally, the Stabilizer 2.0’s flute cavity shape not only accommodates the advanced tool geometry, it also optimizes chip flow for accelerated feed rates. However, as feed rates and cutting depths increase, so do detrimental harmonics.

What occurs is that wave patterns of frequency vibrations become both longer and closer together until they reach a harmonic state and amplify each other. These harmonic vibrations are the sum total of all movement in the machining process, including the cutting tool interacting with the cutting surface, the motions of the machine tool’s spindle, axes and the toolholder. Without tool geometries capable of mitigating the effects of vibrations, speeds and depths of cut must remain lighter to maintain part quality and tool life.

Advancements in cutting tool technologies have boosted metal removal rates over 200% in the last 15 years. In fact, the Stabilizer 2.0 delivers twice the feed rate and productivity of its predecessor. The new tool also doubles tool life even when feed rates are kept at the slower speeds.

To gain the most from advanced variable geometry cutters and run them to their top potential, machine tools must be fast, rigid and robust enough to minimize vibrations when running at high speeds and heavy feeds. The 0.5″-diameter Stabilizer 2.0, for example, requires machines put out at least 35 hp to reach its maximum potential—specifications not every machine tool can provide. Seco and Niagara Cutter could create an even more productive cutting tool, but most current machines would lack the power needed to run the tool to its maximum limits.

Toolholders must also have the mass and rigidity to withstand demanding forces. Standard side-lock holders with set screws or heavy-duty mill chucks are best for these applications, while most shrinkfit holders and collets lack the ability to hold variable geometry tools in place under high-power cutting conditions.

Now that cutting tools have caught up to the performance levels of machines, and are even now exceeding machines’ abil­ities, innovations in these areas will only spur faster part produc­tion. But the real winners of this race between machining systems are the shops that apply the new cutting tool technologies.