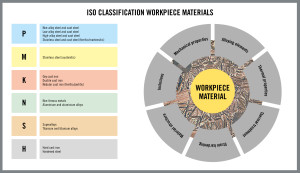 The ISO metalworking workpiece material classification system is divided into six categories: P, M, K, N, S, H (Fig.1)
Properties essentially determine how the material reacts to being machined, and how in turn machining affects the cutting too. K group metals are characterised by abrasiveness, which accelerates tool wear. Heat-resistant superalloys in the S group generally have poor thermal conductivity, which results in heat concentration in the cutting zone that can deform a cutting tool. The hardness of the metals in group H creates great pressure on tools and generates heat as well. The M group is distinguished by strain hardening, in which the workpiece material becomes harder as it is deformed in the cutting process. The increased cutting pressure and heat generation can cause notch wear and other problems. Metals in the N category exhibit a tendency to adhere to the cutting tool, which leads to edge buildup, poor surface finish, and cutting tool fracture. Because each of the five ISO groups named above has a more or less dominant distinguishing physical property, cutting tools can be engineered, to a degree, to counteract the property’s negative effects on the cutting tool. Tools for cutting materials in the H group are biased toward strength, for example, while tools engineered to cut N category metals are sharp and designed to promote chip flow that minimises the occurrence of adhesion.

Workpieces in the ISO P group, however, present more complex challenges. Steels in general and widely differing steel alloys in particular can exhibit more than one or even all of the properties that affect cutting tools, although usually not to an extreme degree. This poses a conundrum for tool development; in many cases, for example, a sharp-edge tool engineered to counter the adhesion tendencies of a low-alloy steel may not be able to withstand the abrasive characteristics of another steel composition. In addition, development of specialised steel alloys continues unabated as manufacturers seek materials matched to the particular performance demands of their customers’ parts.

Understanding metalcutting
When machining steel alloys, finding a productive balance between tool performance properties is like dancing on a thin rope. Striking that balance requires an understanding of the nature of metalcutting and the interaction between the workpiece material and the cutting tool. Metalcutting is not a splitting process comparable to the way that a knife cuts. The metalcutting process instead puts pressure on the workpiece material until it deforms and shears away in the form of a chip. Many collateral effects accompany the shearing action. The mechanical forces required to sufficiently deform the material generate a great deal of pressure as well as heat leading to temperatures on the order of 800-900°.

Interrupted cuts or machining parts with hard inclusions subject the cutting tool to impact. Beyond mechanical considerations, the high levels of heat and pressure can catalyse chemical reactions between the cutting material and the workpiece material, producing chemical wear in the form of diffusion or cratering. And last but not least, metalcutting involves a high level of friction. As the chip is formed and rubs over the tool, it creates friction and what are known as tribological effects; tribology is the science that examines surfaces in contact with each other at certain temperatures and pressures and determines the degree to which the surfaces will modify each other. All these forces and interactions produce varying results; perhaps the most important one is that the tool wears out.

Different steels, different tools
The effects of machining on steel workpieces vary with the composition of the steel alloy and the process by which it is manufactured. Unalloyed steels with carbon content less than 0.25 percent; for example, have been developed for applications such as automobile axles that require strength and resistance to impact and fracture. These rolled or forged alloys produce chips that are difficult to break and that rub the surface of a cutting tool and produce crater wear and even adhesion problems. For these compositions, cutting tools are designed with sharp edges to more efficiently shear the workpiece material, and also employ coatings to resist chemical wear and provide lubricity to the cutting surface. On the other hand, high alloyed steels with alloy content over 5 percent, including elements such as manganese, can be hardened for use in components that require wear resistance and rigidity, such as hydraulic components and machine tool parts. The chips produced generally are easily formed and broken, workpiece was produced via casting or forging, a rough surface and possible inclusions from the mould require cutting tools with both toughness and resistance to abrasive wear.

Economic considerations
The traditional goal of machining operations is to produce more parts faster, and therefore requires application of the most aggressive cutting parameters possible. Other issues, however, modify that simple goal. Economic considerations can play a large role in the selection of cutting parameters. Parts such as aerospace components produced from exotic alloys most often are made in relatively low volumes. Manufacturers machine the parts at a pace aimed to maximise process reliability and preserve the expensive workpiece materials and costly manufacturing time already invested. As a result, speeds and feeds employed with advanced workpiece materials usually are productive but conservative.
The approach to machining of steel components often is different. Many steel parts are manufactured in high volumes and as quickly as possible to maximise economic return on relatively simple parts machined from less-expensive workpiece material. Higher cutting speeds, the typical path to higher productivity, require cutting tool substrates with the ability to retain strength at high cutting temperatures. In light of the growing selection of steel alloys, it can become necessary for manufacturers or machine shops to consult with cutting tool manufacturers to find the tool grade and geometry best suited to a particular application. Ongoing tool development is aimed at creating tools that can cope with the multiple issues presented by steel alloys. Manufacturers seek tools that are sharper yet stronger, with coatings and geometries designed to overcome the heat, pressure, chemical and adhesion mechanisms of wear.

Environmental consciousness
A relatively new consideration also influences the choice of machining parameters for steel materials. Many manufacturers are now pursuing environmentally conscious or “green” machining initiatives. These include reducing energy consumption and minimising the waste generated during the machining process. Although technological machining challenges remain of primary concern when processing exotic metals, environmental concerns are…