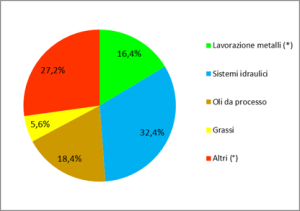 Even in absence of certain estimates about their popularity in the Italian industry, ecologic or biodegradable solutions, free from noxious effects on man and environment, are spreading also among the users of machine tools, thanks not only to their green nature but also to their undisputed efficacy.

A cross-section of the lubricant demand, highlighted by a variety of segments of the domestic industry, has been provided to us by not very recent estimates, because dating back to 2012, but which can be deemed reliable more than one year later, with some benefits of inventory. They are signed by Federchimica, which together with the Group of industrial lubrication companies, or Gail, and with Aispec (National association of Fine Chemicals and Specialties Producers) that is going to dedicate another Lube day,  on 28th March, to the segment, after the last one dating back to 15 months ago.
Numbers clearly indicated the market size. At the beginning of this decade, they circulated in Italy about 400,000 tons per year of lubricants intended by over the half (55%) for the segment of the automotive drive and by the remaining part instead for industrial uses. Within the latter product category, a share of 16.4 percentage points was appanage to the metal machining, against the respective 32.4 and 18.4 of hydraulic systems and process oils. In the statistics, greases conquered the 5.6% slice while to the item Other products was ascribable a further 27.2 of share. The statistics have been commented by doctor Renato Lordi, chemist, former total quality and technical services manager of an oil multinational and today president in charge of the Tribology Centre of Amme-Asmeccanica, that’s to say the Southern engineering association of Naples: «In the category of Other lubricants», said Lordi, who, like other scholars dates back the experiences on friction and wear or on lubrication even to the second millenium of pre-Christian times, as shown by Egyptian hieroglyphs, «include oils for gears and for turbines, those for compressors and guides or still those for general lubrication. While the class Metal working includes», he added in a note, «neat cutting oils, emulsifiable and soluble products; oils for the plastic deformation or oils foe EDM, hardening and protective oils».
The Lube day 2012 by Federchimica hosted in its parterre also Eni, which has calculated in over 10 million tons the world demand for industrial lubricants, with an overall 56% consumed by metal working and by applications that involve hydraulic fluids. In this ambit, the Asia-Pacific macro-region is the most voracious of all, with the 42% demand; followed by North America and Europe with the same 23% share. The contemporaneous business dynamics make the innovation efforts necessarily tend towards sustainability and duration, as well as impacts and the zero dangerousness of technologies. And the same course must be undertaken also by the suppliers of coolants. «They must become essential partners of Original Equipment Manufacturers, or OEM», stated the managers of the six-leg dog taking part in the meeting, «having to transfer the hi-tech requisites of modern machines to their products».

From pioneering experimentations to modern research
Moreover, if the requirement consists in «products with chemical-physical characteristics designed upon lubrication needs of machines» or «in more performing and eco-consistent bases and additives, better if from renewable sources» also in Italy companies and research are working to meet it at best. Finding, moreover, among entrepreneurs, some attentive and evolved partners, standing out for their high sensitivity. «The attention to the eco-system is certainly one of our priorities», stated the co-owner of the Turin Gai Giacomo Srl, Giovanni Gai, «and it was also one of the most important reasons that led us, over 20 years ago, to start exploring the panorama of vegetable-based synthetic esters». Specialized in precision turned small parts, Gai Giacomo owns a fleet of about 40 machines and its oil consumptions can easily reach the amount of 40-50,000 litres per year. After the stroke of lightning for the first and almost pioneering proposals coming from Switzerland («Where green lubricants have at least the 80% use rate», reminded Giovanni Gai), the Piedmontese mechanical company has adopted 100% made in Italy solutions. Identical, or even higher, was the satisfaction due to, last but not least, a perceivable efficiency rise: «For our activity the use of lubricating-cooling substances is essential, especially on some machining processes and more in general the use of vegetable solutions has allowed us to increase the tool service life up to 40%», stated Gai, «granting also the possible 98% recovery of the centrifugation oil, against the previous 92 peaks and an overall 6-7% saving on energy costs, without neglecting the positive outcomes given by the faster inspections by entrusted authorities». Introduced on the market with not competitive price lists in comparison with standard lubricants and coolants, today the products of biologic origin currently in use by the Piedmontese turning company can validly compete also from a merely economic point of view. «The recent upwards revision of excise duties of 0.85 Euros per kilo», explained the co-owner of Gai Giacomo, «has contributed in compressing the price gap that separated the oils derived from petroleum from the mixtures of natural esters with additives like sulphated, anti-oxidants and metal passivators in use at our toolshops, reducing it to a minimum of one centime to a maximum of five centimes of Euros for each kilogram: 2.7 Euros for mineral and 2.8-3.2 Euros for bio». As we have had the opportunity of underlining before, the compliance with the regulations concerning the reduction of noxious emissions into the atmosphere is another element to be kept into account. For the solvent-refined mineral oil with additives, they are admitted in the concentration of five milligrams per cubic metre of air, but the same regulation is not currently applicable to the vegetable product.

The home market can (and must) grow
In the course of his visits to international trade fairs or exhibitions, Gai had the chance of seeing quite frequently joint promotions and demonstrations of particular machine families together with special oils of vegetable or synthetic origin but anyway 100% biodegradable. It seems however that the industry’s offer has been only partially acknowledged by our national workshops. Among them, also realities with a machine fleet of a certain relevance, that’s to say included between eight and 15 units, have alternatively expressed amazement («We had never considered this hypothesis, you have given us an idea») or doubts springing from specific requirements: «The problem of the replacement of mineral oils with other vegetable ones», reported companies operating in particular in moulding, «resides in the need of carrying out a range of targeted experimentations on their operation. Besides, those that do not consume oils intensively or use for instance minimal air jet systems» the green revolution can be faced successively. In other cases, the use of preparations having petrolatum as main ingredient represents the only policy of eco-sustainability and damage reduction that can be followed in the short term; while the prevalence of water emulsions makes vegetable oils scarcely appealing also from the pure economic point of view. Older market surveys highlight on the other hand that the Italian awareness can further grow: «In 2008», further reminded Renato Lordi, «we estimated that Europe used 5.2 million ton lubricants in all, of which 0.15 million tons (2.9%) were eco-sustainable. Moreover, inside the European Union eco-compatible products have an inhomogeneous distribution that, however, the new regulations can increase. We estimate», added the representative of Amme-Asmeccanica, «that in comparison with traditional lubricants, their market share corresponds to 15% in Germany, to 11 % in Scandinavia and to 1% in France, Spain, United Kingdom and Italy».
In daily activities, the practical advantages of the use of vegetable products are anyway quite clear. The personnel, as some interviewees reported to us for the present survey, is not for instance obliged to use uncomfortable protective masks, just using technical glasses and gloves for precautionary purposes and in compliance with regulations.

Ecology gives the best in workshop
Besides, the flammability point is fixed at 210 Celsius degrees for the oils of mineral origin, but at even 300 for vegetable oils that, as far as cutting solutions are concerned, feature the 90%, or higher, biodegradability, against the 15-35% gradient of more traditional products. «The vegetable oils used in their natural form», commented Renato Lordi, «show, in industrial applications and in comparison with mineral oils, various advantages, counterbalanced, however, by some unavoidable contraindications. Among the benefits, rank the excellent lubricating performance that contributes in anti-wear performances in pumps; a very high viscosity index (about 220 against 100 of mineral oils) and then a minor decrease of viscosity when temperature rises. On the contrary», added the Tribology Centre manager, who is going to organize next May, in Naples, the 15th national convention on the matter, «they are characterized by a limited oxidation stability when they are used as lubricants. Their rapid oxidation increases their viscosity and it is possible to overcome this hindrance by turning to appropriate anti-oxidation additives and avoiding working temperatures that exceed 80 Celsius degrees. It is however worth noticing that the research has worked to bring more stable bio-technological vegetable oils to the market; while on the contrary other problems are still to be solved, like the high yield point, expression with which we indicate the temperature at which an oil loses fluidity, and the sensitivity to the water contamination that causes foam and hydrolysis phenomena». Together with the consolidated economic competitiveness and the limitation of the impacts on the environment, there are still the factors that, transferred to the mechanical machining, can make the difference. The higher lubrication power is granted by their nature of esters since, as polar molecules, they tend to form on metals a lubricating film that hinders the contact between metal and tools, reducing frictions and then assuring a longer service life to the latter: «The recent availability of vegetable oils with increased thermal-oxidative stability», ended Lordi, «has allowed the development of neat cutting oils showing notable performances against the longer tool life and especially a better finishing of the worked piece». The environmental awareness is then the X factor that puts a tiger in the motor of the Italian mechanics.

Eco-compatible or not: the guidelines of the European Union
The 2011/381/EU decision has established that, to be considered ecologic, a lubricant must conform to the following four criteria:
a) non-toxicity, that is to say it must not be noxious for the environment and man on the basis of tests concerning the water toxicity, biodegradability and bio-accumulation;
b) biodegradability and non-bio-accumulative nature: depending on the type of biodegradability (immediate or intrinsic). The substance will biodegrade in the environment with the following tests regarding the parameters mentioned at point a) and respectively: OECD (201, 202, 203, 210, 211), OECD (301 A, B, C, D, E, F), OOECD( 305, 107, 117, 123);
c) implementation starting from renewable raw materials: the decision indicates, category by category, the minimal percentages of the carbon percentage deriving from renewable raw materials that the product must contain;
d) performance: it must grant the conformity with minimal technical performance criteria established, according to the type of application, by regulations specifically indicated in the decision.