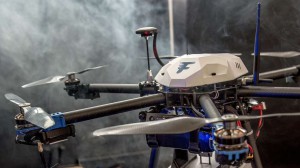 Startup Flirtey has teamed up with NASA to conduct a Federal Aviation Administration (FAA) approved exercise to deliver some medical items by drone. This is a good news for a startup trying to spread its wings, but even better news for rural folk who instead of waiting days for medication will have their prescriptions filled in just half an hour.

Much of the buzz surrounding UAV deliveries over the past two years has come from the direction of Amazon’s Prime Air drones, which are still undergoing testing. Google and numerous startups around the world are also looking to get in on the action, though the industry has been made to play the waiting game while the FAA rejigs its regulations for unmanned flight.

Flirtey now working with NASA to carry out the first real-world demonstration of drone delivery as approved by the FAA. It is still technically a research rather than commercial exercise, but it is set to impact the wellbeing of real people. “We started speaking to this community about what could make things better, they said that if there was a way they could receive the medication quicker that would help,” Sweeney tells Gizmag. “So we brought drone delivery to Virginia and will cut the delivery time from a day or more to half an hour.”

As attendees of the Wise County medical clinic are prescribed medications, the scripts will be sent to a large out-of-city pharmacy. The pharmacy fills the prescriptions and loads them onto a NASA fixed-wing aircraft which will be guided remotely to the Lonesome Pine airport. Here, Flirtey drones made from carbon fiber, aluminum and 3D printed parts will complete the last leg. “We are aiming to deliver 24 packages of medicine for 24 people, four on each flight across six drone flights,” says Sweeney.

Sweeney hopes this proof of concept whereby the benefits of drone delivery are realized, albeit on a small scale, will act as a catalyst for the delivery of everyday items. Revamped FAA rules are now not expected until at least June 2016 and are unlikely to permit flight over populated areas, a necessity for fully fledged drone delivery. But Sweeney is upbeat about the direction the industry and his company is headed nonetheless.

And on the possibility of being muscled out by the industry’s bigger players, he was equally optimistic. “If you look back at the history of tech, it’s not usually the incumbents who win,” he says. “By being a small and nimble startup we are uniquely placed to get out ahead of these bigger companies. Google is still searching for a solution and I don’t think Walmart or eBay is going to use Amazon (for delivery). So there’s a big opportunity for Flirtey to be the big independent drone delivery service in the US.”