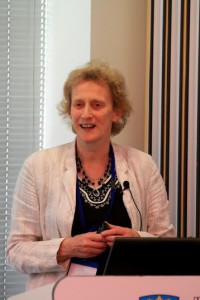 One of Britain’s top female scientists has urged the media, schools and parents to play a major role in encouraging more girls to take up careers in engineering. Experimental physicist Professor Dame Athene Donald, who is also Master of Churchill College, Cambrdge, was delivering a lecture entitled Engineering: An Unsuitable Job for a Woman? organised by the Nuclear Advanced Manufacturing Research Centre.

She told guests attending the lecture in the University of Sheffield AMRC’s Knowledge Transfer Centre, that Britain faced a pressing shortage of engineers, but was failing to take advantage of the scientific potential of women.

Meanwhile, only 4.3 per cent of the young people completing engineering or manufacturing apprenticeships in the UK were women. “We are the lowest of the low. The lack of female engineers in the UK isn’t about genetics, it’s about culture and the way we bring up our children,” said Dame Athene. “Childhood and education – I think that’s where the rot starts.”

Work experience placements organised by schools had a similar effect. While boys were pushed towards design and engineering, girls were pushed towards working with children or education and health and beauty. “Our schools have a huge amount to do to overcome gender stereotyping,” said Dame Athene, who suggested one of the benchmarks used to judge schools by regulator Ofsted ought to be how they succeeded in overcoming gender issues.

Dame Athene outlined a series of steps which employers could take to support and encourage women following careers in engineering but opposed positive discrimination, having seen its effects while working in the United States. “I saw young women being put into positions they were not ready for and then failing. If you appoint someone who is not the best person for the job, it can backfire,” said Dame Athene, who also warned the UK’s “laddish culture” was getting worse.