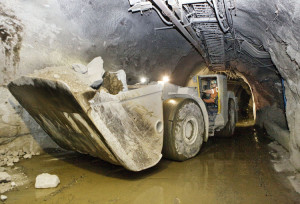 China is short of copper, the mines that form the backbone of current supply are aging, and the few new deposits are positioned in far flung locations such as Mongolia. “Everybody likes copper because there is not much of it,” said Menno Sanderse, a mining analyst at Morgan Stanley. And yet, mining companies that have long coveted copper assets have been thwarted by an industry tightly controlled by a handful of players. Until now. The news that producers Antofagasta Plc and Teck Resources Ltd. have looked at a potential deal suggests companies may be trying to find ways to break the impasse. Both have said they aren’t currently in merger talks.

“The opportunities for consolidation are real,” Paul Espie, managing director of mining-focused private equity group Pacific Road Capital, which has $800 million in assets, said in an interview Tuesday in Santiago. “It’s an interesting time because valuations are low. We are looking at the consolidation situation in Chile right now.”

Buy vs Build
The scarcity of new copper deposits, falling grades at mines in Chile, the U.S., Australia and Indonesia, and runaway costs to develop projects combine to make it more attractive to buy a rival than build a new mine. The first catalyst sparking hopes of wider consolidation has been a 17 percent drop in prices over the past two years, which has made vulnerable producers more affordable. Still, there’s differing opinions about how a price recovery would help buyers snap up target companies.

“I have not seen this divergence between bulls and bears in a decade,” Paul Robinson, a director at London-based consultants CRU Group, said on March 30. The potential for M&A activity was a talking point at the annual industry gathering this week in Chile, the largest in the copper sector, and attended by more than 3,000 executives, traders and bankers. For Rio Tinto Group, the world’s second-biggest mining company with copper assets in the U.S., Mongolia and Indonesia, a barrier to dealmaking is the expensive demands from sellers. “We’ll keep an opportunistic view on M&A but it’s not our priority today,” Jean-Sebastien Jacques, the company’s head of copper, said in an interview Wednesday in Santiago. “You’re going to have to pay a high price for any high quality asset. The good assets are not easy to come by. I don’t think it’s going to be build versus buy. It’s going to be build and some buy.”

Family Controlled
Three main obstacles stand in the way of deals. First, the industry is concentrated, with the top 10 miners accounting for more than 9 million tons of copper, or almost half the world’s mine supply, according to CRU. Second, most targets are tightly controlled by families, tycoons or governments, making a deal difficult. Third, pure copper miners command a premium, making an acquisition financially onerous to buyers. “Buying any decent size copper producer has many obstacles,” said Richard Knights, mining analyst at Liberum Capital Ltd. “There is a premium in the market for copper producers.” The last major copper acquisition occurred in 2013 when Swiss commodities giant Glencore Plc bought diversified miner Xstrata Plc, swallowing stakes in big mines in Chile and Peru.

Two big producers are unlikely to participate in any acquisitions spree, Codelco, the world’s largest copper miner, is owned by the Chilean government, which has indicated it has no plans to privatize the company. KGHM Polska Miedz SA, the owner of Europe’s biggest copper deposit, is one-third controlled by the Polish government, also an unlikely seller. Other big copper producers are held by families or a group of tycoons. Antofagasta is controlled by Chile’s Luksic family.
“There’s not much room for consolidation. The majors are quite concentrated,” Diego Hernandez, chief executive officer of Antofagasta, said in an interview last week. “There might be some processes that should start this year.”

Scarcity Premium
Other players include Teck, which is backed by Canada’s Keevil family, while top 10 producer Grupo Mexico SAB is controlled by German Larrea and his family. While lower prices may prompt some to think about growing through acquisitions, Grupo Mexico is focused on developing its own projects, Chief Financial Officer Daniel Muniz said. “It has to have a lot of business sense for you not to develop your own projects,” he told reporters in Santiago on the sidelines of a copper conference this week. “Our assets are world class. What other world class things are out there?”

The remaining players would command a scarcity premium. Phoenix-based Freeport, a perennial takeover target, trades at 22 times its estimated earnings for 2015, making it an expensive purchase. BHP Billiton Ltd., the world’s largest miner, trades at 14.3 times estimated earnings, according to data compiled by Bloomberg. In addition, Freeport owns a significant oil business, which is unlikely to attract miners.

Potential Takeovers
That leaves Toronto-listed First Quantum Minerals Ltd. and Boliden AB, the Swedish-based zinc and copper miner, as the only potential takeover targets of significant size. For a buyer, both present some challenges. In the case of First Quantum, which operates the largest copper mine in Africa, industry executives see its project to build a large open-pit in Panama as a risk.

Boliden combines mines with smelting operations, where the ore is transformed in refined metal. Traditionally, copper smelting delivers lower returns than copper mining, potentially discouraging corporate predators. Beyond those potential targets, mining executives could look at early-stage developers in Africa, Latin America and Asia. Yet such acquisitions wouldn’t add any significant size to the top-10 copper miners and would bring the risk of cost overruns and delays in developing the projects.