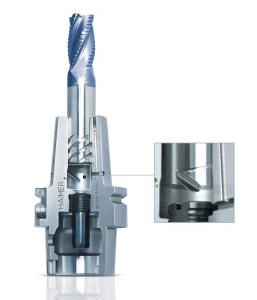 The Japanese leader for solid carbide endmills OSG-Group offers its high quality cutting tools with the HAIMER Safe-LockTM system worldwide. The unique Safe-LockTM design in cutting tools and toolholders combines a high precision press fit clamping with a positive form locking mechanism. This prevents round cutting tools from being rotated or completely pulled out from its tool holder during heavy machining. The combination of symmetrical pull out protection, highest concentricity and excellent balance of the Safe-LockTM system, results in a vibration free machining process. This leads to a more efficient metal removal rate, that is superior when compared to conventional Milling chucks or Weldon shanked cutting tools and toolholders.

OSG has been testing various systems for pull out security over the past several months. Only the
technology of the Safe-LockTM system could convince the high-tech Japanese company. Jiro Osawa,
Technical Managing Director at OSG headquarters and CEO for North America, explains: “Our field testing
proved that the combination of our endmills with Safe-LockTM resulted in higher RPMs and feed rates even
with difficult-to-machine materials. This enables our customers to obtain a significant increase in their current
metal removal rates, while at the same time having a higher security in their machining processes.
Safe-LockTM also has a very positive effect on tool wear.” 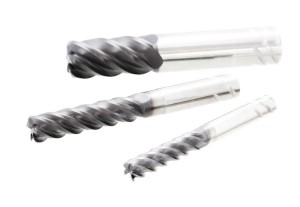 For the globally oriented corporation that is represented in 29 countries with 52 subsidiaries, over 5,000
employees and annual sales of approx. one billion US dollars, there was one further crucial factor, as Jiro
Osawa argues: “In addition to the absolute technical superiority of Safe-LockTM compared to alternative
systems, it is the only system that is actually in high demand globally and also available in various clamping
methods. Since we are not only in Japan but also well represented in North America and in Europe, we have
decided to sign this license agreement and integrate the Safe-LockTM design into our tools worldwide.”

Andreas Haimer, President of the Haimer Group, explains: “We have established Safe-LockTM as a standard
in roughing and heavy machining for which a variety of tools are available worldwide. We are very proud and
happy to have reached a strong partnership with OSG, one of the largest and leading producers of tools in
the world.”

Since its launch in 2007, the Safe-LockTM System has developed very successfully and excited many
international customers. Last year alone, the growth was four times higher compared to previous years. This
boom can be attributed to recognizing that the productivity increases resulting from the pull out protection is
not restricted to typical aerospace applications but the cost and time savings can also be used in any typical
milling application.