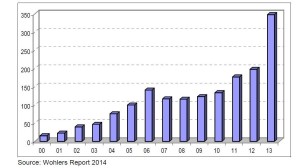 Sales of 3D printers capable of manufacturing metal parts are rising very fast, a new report by 3D printing industry analysts Wohlers Associates announces. According to the research, 348 3D metal printers were sold in 2013, a 75.8% increase over 2012, which saw 198 of the machines sold. The primary buyers are in the medical, dental and aerospace industries, and used for both prototyping and manufacturing. “The medical and dental companies are using them for manufacturing, and the aerospace companies are using them for testing and certification as they gear up for manufacturing,” Terry Wohlers, the company’s President said.

Despite this growth, don’t expect to have a 3D metal printer in your house anytime soon. Wohlers doesn’t expect to see this growth create market pressure for consumer 3D metal printers. At least, not in the short term.
“Printing in metal is another animal,” Wohlers explained. “Temperatures are much higher, so safety is an issue. Also, removing support material and finishing parts require shop tools such as band saws and grinders, as well as a lot of know-how. Printing in plastic is difficult enough and most consumers will never do it.”
Overall, according to the firm, the market for 3D printing products and services grew to $3.07 billion in 2013, representing a growth of 34.9% over 2012.

Most 3D printers, particularly on the consumer side, primarily use polymers as their base to create plastic items. Making items out of metal with a 3D printer is a much more complicated – and costly – process. The printers themselves can cost in the tens or hundreds of thousands of dollars, depending on the model.