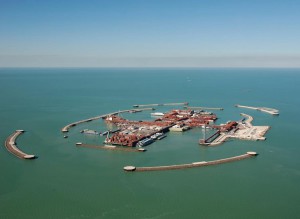 Eni signed a strategic agreement with KazMunayGas. The signing took place in the presence of the President of the Republic of Kazakhstan, Nursultan Nazarbayev, and the Italian Prime Minister, Matteo Renzi, KazMunayGas (KMG) Chairman of the Management Board, Sauat Mynbayev, and Eni’s CEO, Claudio Descalzi. The agreement will result in KMG and Eni each holding 50% of exploration and production rights in Isatay, an offshore exploration area located in the north Caspian Sea.

The block is estimated to have significant potential oil resources and will be operated by a joint operating company. The agreement also involves the development of a shipyard project in Kuryk, located on the Caspian Sea coast of the Mangystau region. The shipyard will be managed by a project company which will be formed by Eni and KMG. This agreement further strengthens Eni’s presence in the Republic of Kazakhstan, where it cooperates the Karachaganak field and is equity partner in several fields in the north Caspian Sea, including the giant Kashagan field.