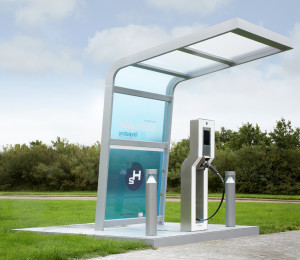 Using hydrogen fuel cells it is possible to produce clean cars that emit only water. Hydrogen (H2) fuel cells react H2 and oxygen (O2) gases to produce energy. For that to happen, several related chemical reactions are needed, two of which require catalysts. The first step is to produce the two gases separately. The most common way to do that is to break down, or “split,” water with an electric current in a process called electrolysis. Next, the fuel cell must promote the oxidation of H2. That requires reduction of O2, which yields water. The catalysts currently available for these reactions, though, are either too expensive and demand too much energy for practical use, or they produce undesirable side products. So, Yi Cui’s team at Stanford University and James Gerken and Shannon Stahl at the University of Wisconsin, Madison, independently sought new materials for these reactions.

Cui’s group worked on the first reaction, developing a new cadre of porous materials for water splitting. They notably used earth abundant metal oxides, which are inexpensive. The oxides also are very stable, undergoing the reaction in water for 100 hours, significantly better than what researchers have reported for other non-precious metal materials. On the side of oxygen reduction, Gerken and Stahl show how a catalyst system commonly used for aerobic oxidation of organic molecules could be co-opted for electrochemical O2 reduction. Despite the complementary aims, the two studies diverge in their approaches, with the Stanford team showcasing rugged oxide materials, while the UW-Madison researchers exploited the advantages of inexpensive metal-free molecular catalysts. Together these findings demonstrate the power and breadth of chemistry in moving fuel-cell technology forward.