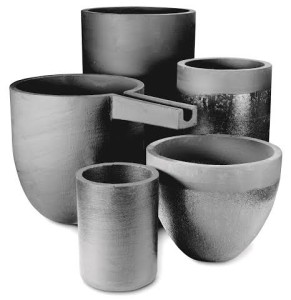 Molten Metal Systems, business of Morgan Advanced Materials, is carrying out field studies to achieve substantial cost savings in operational conditions for customers in the aluminium melting industry.  The field trials of the Syncarb Z2 e2 (in the photo) are being used to develop Total Cost of Ownership (TCO) models, which take into account all the direct and indirect costs associated with their use.  One large metal casting business involved in the field trials has decreased its total crucible TCO by approximately US$777,000.

The laboratory analysis highlighted that Syncarb Z2 e2 has a 56% higher three point transverse bending strength, which means that it is more tolerant to mechanical stresses during operation and to mechanical damage during handling compared with other crucibles.  The oxidation tests, where the samples were exposed to an oxidising atmosphere for five and 10 days at 750°C, resulted in Syncarb Z2 e2 having lower losses.  Thermal conductivity tests were also carried out by the laser-flash technique to 1600°C and showed that Syncarb Z2 e2 had a higher thermal conductivity at all operating temperatures.  This higher conductivity and better oxidation resistance implies more efficient heat transfer for a given thickness of crucible over a longer period of time, translating to a more efficient melting operation during the lifetime of the crucible.

Explaining the purpose of the ongoing field trials, Global Technology Director Mirco Pavoni says:  “While laboratory investigation provides controlled analytical results, field trials connect theory with reality.  We have applied the initial results of both laboratory and field testing to TCO models in order to help metal casters understand that the actual costs of purchase are more than simply the sum initially paid.  Metal casters are being pushed to squeeze costs out of their operations as much as possible, resulting in the choice of consumables based solely on their purchase price, without input from production, quality or maintenance.  This can result in ongoing costs outweighing initial savings and the TCO models we are developing illustrate the true cost-effectiveness of the Syncarb Z2 e2.”

As global metal casting competition becomes fiercer, TCO models have begun to play a significant role in advanced metal casting facilities.  According to Morgan, facility managers have begun to understand that purchasing decisions must be made analytically with data provided from each department in the business that is affected by the choice of crucible.  At just two of the initial sites that Morgan has evaluated, Syncarb Z2 e2 showed significant longevity improvements over other manufacturers’ crucibles used, decreasing their TCO by approximately US$80,000 and US$777,000 respectively.