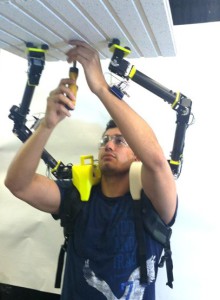 MIT researchers are developing extra robot limbs that can help out humans where an extra hand, arm, or leg might be useful. The project is being run at MIT’s d’Arbeloff Laboratory for Information Systems and Technology and headed by Federico Parietti and Baldin Llorens-Bonilla, both in the Mechanical Engineering Department. Federico has been working on lower limbs, bracing strategies, and stability, while Baldin contributed to the robot shoulder arms, along with coordination and task planning.

The concept was demonstrated with installing ceiling panels in an airplane, a task that must be duplicated dozens of times in the construction of an airliner.  The Supernumerary Robot Limbs team looked at this task, and added two lightweight robot arms to a frame attached to a backpack. The arms are attached directly over the spine so that the body can carry the extra weight without strain. This alone would be noteworthy, except that the user now has no way to command the robot arms to move – a conventional joystick or gamepad would take up hands already busy with panels.

So the amazing part of this research is having the arms decide for themselves when and where to help. Sensors on the human’s wrists and on the robot mount determine where the human is on the task, and assigns the robot arms to help. The robot arms assist the user by pushing up the panel against the ceiling, allowing the human operator to put in screws to attach the panel. As the panel is able to support itself, first one arm goes down, and then the other as the robot senses that the force required to maintain the pose has diminished. The arms are programmed by the “teach by demonstration” method. A second human first demonstrates to the robot how to help by moving the robot arms manually with the the robot remembering this lesson so it is then able to make the moves on its own.

The project is being supported in part by Boeing, hence the interest in aircraft assembly, but the team sees a range of potential applications for the technology. These include assisting senior citizens, construction workers, and other assembly operators where extra arms might come in (pardon the phrase) handy.