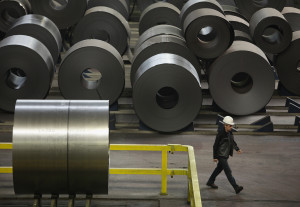 The Rhine Westphalia Institute of Economic Research in Essen forecast that German steel industry is recovering in 2015. According to results of the latest steel report of RWI, crude steel output in Germany is expected to grow by 0.5% this year and to increase in the coming year by 1.7% to 43.6 million tonnes, when the economy begins to recover. Meanwhile, the worldwide crude steel production will increase by almost 4% in 2014, and by slightly more than 4% next year.

As the report said that the steel companies will be relieved on the cost side by low commodity prices and fairly stable prices for steel products. German crude steel output could maintain the level of the previous year in 2013 despite dampening conditions. Although the average annual steel consumption fell slightly and less hot rolled steel products were produced, it remained at 42.6 million tonnes in 2013. The report said that in the first months of this year, production of German industry that uses steel has risen substantially, mainly due to the weather related good situation of the construction activity.

How China’s demand is developing is crucial for the international steel market during the forecast period and the decreasing demand from China burdens global steel production.