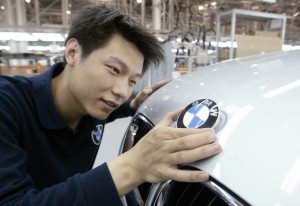 BMW is investing on Chinese market. The German carmaker will produce three additional models in China, including a new compact, plans to expand the capacity of its two manufacturing plants in the country, Wall Street Journal reported. “We are strengthening our focus on meeting the needs and aspirations of our Chinese customers,” Friedrich Eichiner, BMW’s chief finance officer, was quoted as saying in a speech in Beijing. “We are going to double our range of locally produced models in the future-from three to six.”

BMW sold 391,713 cars in China last year, up 20 percent over the previous year. In the first half of 2014, the company saw its sales rise 23 percent from a year earlier to 225,035 units, the report said. The sales include cars produced by its BMW Brilliance joint venture in China and imports.

The company’s plants in Dadong and Tiexi can produce up to 300,000 vehicles combined a year. BMW plans to expand that capacity to a combined 400,000 cars over the next two years, according to the report.