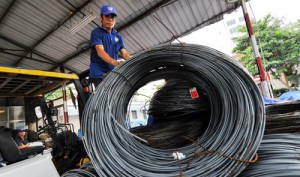 Indian steel firms are asking for a rollback of the 2.5 per cent duty imposed on coking coal imports. They will try to impress upon the Finance Minister that there is shortage of the raw material in the country and the government should actually incentivize imports.

The steel makers will channelize their demand through one of the leading lobby groups such as Ficci and Assocham in the absence of any such industry organization amongst themselves, head of a leading steel maker said today. “All steel makers are on the same page on this issue and have taken a decision to urge the Finance Minister to consider rolling back the 2.5 per cent duty on coking coal imports. The imposition of import duty defies any logic,” he said.

Surprising the steel industry, government levied the duty on imports of coking coal, a key steel making input, in the Budget from nil earlier. It requires 0.8 tonnes coking coal to produce one tonne of steel. “In our country, coking coal is not adequately available and chances of the present situation prevailing for many more years. There is every possibility of a three-fold rise in the annual coking coal imports to 120 million tonnes (MT) in the next 10-12 years,” he said.

India’s steel making capacity is projected to go up to 300 mtpa by 2025 from around 100 mtpa now. Steel makers’ import around 40 million tonnes of coking coal per year. This is due to subdued and stagnant supply from state-run Coal India Ltd. “When there is inadequate supply domestically, government should incentivize steel makers for importing the raw material and instead of that, it is levying import duty. This is not conducive for the industry,” he said.

Roughly estimated, the duty hike would lead to a Rs 200 per tonne increase in the cost of steel production, he added. The proposal had evoked sharp reaction from the domestic steel makers with some saying the move was “rather surprising and disappointing, given the shortage of metallurgical coal, in our country”. Others said that in view of the current shortage of domestic coal for both steel and power sector, the increase in basic customs duty on coking coal “requires to be reconsidered”.