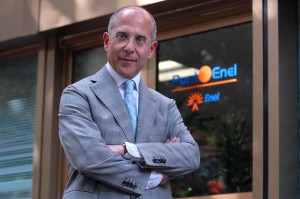 Enel signed agreements with two leading companies in the Chinese power sector. The partnerships were signed during the official visit to China of Italy’s Prime Minister, Matteo Renzi. The agreement with China Huaneng Group is aimed at jointly developing technologies, conventional and renewable energy projects, carbon strategy programs and academic cooperation between the research departments of both companies. The agreement with China National Nuclear Corporation is focused on cooperation in the construction and operation of nuclear power plants. The signings took place in the presence of government delegations from Italy and China, at the end of the Business Forum between the two countries, held in the Chinese capital.

Enel CEO Francesco Starace signed a framework cooperation agreement with the President of China Huaneng Group, Mr. Cao Peixi. Following joint work since 2009 in the field of Carbon Capture and Storage, the two companies have decided to further expand and deepen their relationship. They will forge a collaborative effort in the areas of scientific and technological cooperation, development of projects for the use of electricity from conventional and renewable energy sources, management research in the fields of social economy, sustainable development, policies and regulation, as well as management of carbon assets and carbon strategy.

Mr. Starace also signed a Memorandum of Understanding with Mr. Qiu Jiangang, Vice President of China National Nuclear Corporation (CNNC), the state-owned company responsible for all aspects of nuclear programmes in China. The agreement establishes a framework for the exchange of information and best practice in the development, design, construction, operation and maintenance of nuclear power plants.

On the sidelines of the event, Enel CEO Francesco Starace remarked: “The agreements signed today mark the beginning of cooperation with key Chinese companies in sectors that will be crucial to meeting the energy challenges of tomorrow. These agreements also demonstrate the value that Enel can bring through its technology and experience in many areas of the power sector. I am confident that the continued cooperation of Enel with these leading Chinese companies will benefit all the parties involved.”