During the last year of my university course of Industrial Designer by “Bezalel Academy of Art & Design” in Jerusalem I attended a course of design applied to metals run by the Industrial designer and metal master Shai Barkan. I was requested to realize a kitchen tool. At the beginning I was guided by morphological and shape ideas but when I had to manufacture the prototype, working in a metalworking workshop, I followed the transformation of a 304 steel sheet, bent according to a conical shape. The sheet metal transformation from a bi-dimensional sheet to a three-dimensional structure led me to wonder: is there a metal sheet with shape memory that can be rolled in the shape of a cone and then recover its original flat shape? The answer that was suggested to me by metal experts was: yes, using 301 steel with harmonic quality. My first prototype was anyway still made of 304 steel. In spite of that, implementing this prototype, I won a competition inside the design school, winning an award by Israel Museum in Jerusalem for the best concept for a domestic object. The award was sponsored by the prestigious American Company “Crate & Barrel”. The first prototype of the grater had been manufactured with 304 steel but I wanted to implement it again with harmonic steel and to assess the validity of my idea. 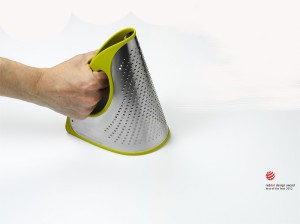 Tests on raw material and cutting
Harmonic steel, applied in the production of springs, can be generally found under the form of sheet metal strip of few centimetres of height. For my prototype I needed a lamina of about 300 mm. After the first difficulties in identifying a supplier providing strips with bigger height, I had also to choose the right thickness. Standard graters are made with 0.4 mm sheet metal. The harmonic steel with this thickness turned out to bee too stiff, especially when bent in small radii in the grater top. If we exceed the maximum tolerance, the sheet metal absorbs a bent and does not recover its full flatness after being closed like a cone shape. I tried various thicknesses and I identified the right one included between 0.18 and 0.2 mm, with the “work hardened” specification. In this phase I produced some prototypes through laser cutting and I tried to reproduce the plot of the grater teeth like in the most common graters: cross cut with a thrust that opens in four teeth and a round cut with a drop thrust. These machining types have charged the sheet metal with ribs that have limited the elastic properties of the harmonic steel in deformation zones. In this period have appeared on the market graters with “C”-shaped cuts, implemented through photochemical etching, standing out for excellent performance. “C”-shaped teeth leave the sheet metal with a minimal deformation, that’s to say stress relieved. This solution inspired me and I tried to apply it to the “Flexy” grater. After some experiments, I noticed that the harmonic steel had not lost its qualities with this type of machining. “C”-teeth are apparently more delicate than traditional padded teeth. Considering that nobody had ever implemented a grater with 0.2 mm sheet metal, there was the risk that teeth could yield due to the impact with cheese. Also this test was overcome and the 0.2 mm steel proved to be very sturdy! 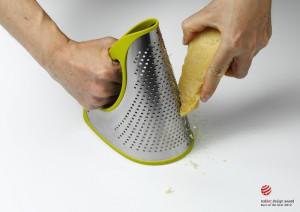 Sheet metal and plastic in production
After a long period in which the project evolved and some details changed, I was informed by a colleague industrial designer – Yotam Shabtai who worked as new product development manager – that the company was about to renew the catalogue and revive the brand after a property change. I proposed the grater with utmost caution, knowing that it would have issued several challenges before arriving at the mass production of a product. The company on the contrary willingly seized the opportunity and it started an intense period of plastic moulding experimentation. One of the problems of the thin harmonic steel sheet is the difficulty of protecting the edges without giving up the “memory” qualities of the matter. While prototypes had no protection at the extremity of the steel sheet, the industrial product had to be implemented in co-moulding of plastic material with the steel sheet already inserted into the die. It is not a banal process to make the plastic material slide along a edge featuring a total length of about 900 mm. To make the plastic perfectly “hold on” to the steel, this was sheared at the edges along the whole grater perimeter with repeated trapezium-shaped cuts. During the first moulding attempts, besides, a problem aroused in the handle area. In this zone plastic had to slide from both handle sides, while plastic instead “pushed” steel outside. The solution was: to give up steel inside handles. 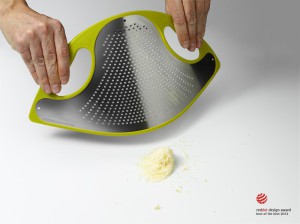 Harmonic steel has won
Despite the problems found, the grater was sent to the Red Dot award and, already in this phase, it won the prestigious prize RED DOT AWARD in the strict category of BEST OF THE BEST and it was on show for one year at the RED DOT Museum in Singapore. Finally, once solved all technical problems, the grater production was started up and it was finally marketed worldwide. In January 2013 it was presented at the “Homi” exhibition in Milan and in February 2014 at “Ambiente” (Environment) in Frankfurt. Besides, the grater is part of the design collection of the Israel Museum, Jerusalem. The use of the harmonic steel sheet grater in this sector allowed implementing an innovative product in a sector where it is difficult to devise surprising items and has created a great opportunity in commercial and visibility terms to the producing company. This experience provides inspiration to design other consumer products with the harmonic steel sheet.