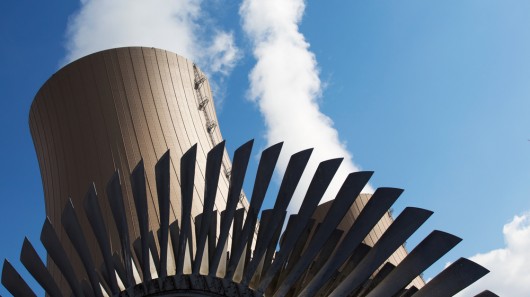 Drezel University’s researchers developed a metallic nanocoating derived from a virus of the tobacco plant that could lead to more efficient steam production, improving the performance of steam turbines, air conditioning and electronics cooling systems. Water’s transition from liquid to gas has plenty of applications beyond the kitchen: water treatment plants, heating and AC systems, and the steam turbines that we use to produce electricity are all heavily dependent on this process. Making this transition even slightly more efficient than it is now could therefore have quite a big impact on our energy outlook.

The promise of such a breakthrough comes from an unexpected source – a virus common to tobacco plants. The tobacco mosaic virus was the very first virus to be identified, back in 1930, and has been studied in detail since then. It’s a simple organism that consists of a single strand of RNA surrounded by a dense network of coating proteins. Today, scientists think that this layout is ideal for building self-assembling nanostructures. Matthew McCarthy and his team at Drexel University are using the virus to create a special coating that uses capillary forces to distribute water evenly across a surface. When used to coat the surface that separates a heat source from the liquid being heated, the scientists found that this coating helps boil the liquid more than three times more effectively. As water (or any other liquid) starts to boil, there comes a point where bubbles of vapor form and stick to the surface that separates the liquid from the heat source. This point, known as the “critical heat flux,” is problematic because these air bubbles prevent the liquid from heating locally, overheating the surface instead.

To work around the issue, McCarthy’s team used a mutation of the tobacco mosaic virus that features molecular “hooks.” These hooks let the virus attach to nearly any surface, be it stainless steel, aluminum, copper, gold, silicon or a polymer. The virus is then coated with a thin layer of metal to form a solid structure that the researchers dubbed “metallic grass.” When liquid comes in contact with this surface, it quickly sticks and spreads due to capillary forces, making it harder for the surface to dry out even as it’s boiling. When air bubbles do form on the surface, they also tend to leave faster, for a much greater heating efficiency. In the team’s preliminary results, applying the metallic grass coating to the boiling surface showed a 240 percent increase in critical heat flux, meaning that much more heat can be transferred from the heat source to the liquid before bubbles start sticking to the boiling surface.

“Phase-change heat transfer plays an important role in everything from power generation to water purification, HVAC and electronics cooling,” says McCarthy. “Increasing performance of these systems would translate to significant improvements in the way we produce, consume and conserve our energy and water resources.” McCarthy’s team will now look at the performance of dozens of different surface configurations, changing both the spacing of the nanostructures and the shape and the coating metal, looking for ways to improve performance even further.