The Fraunhofer Institute for Environmental, Safety and Energy Technology UMSICHT in Oberhausen and Hörmann, a family-owned company, have developed a new type of fire-resistant glass that holds up under even extreme heat – and ported this glazing from the beaker to the production line within four years. No more toxic acrylamide, around 85 percent less process waste, a leaner manufacturing process, excellent performance – these product merits garnered the development team the Joseph von Fraunhofer Prize. By rights, the glazing developed by Fraunhofer UMSICHT and Hörmann KG, Europe’s market leader in doors and gates, should not work. It does, though, in a way that exceeds every expectation. The new fire-resistant panes do not contain carcinogenic acrylamide, so they can be processed with no toxicological risks. The production line that makes the novel fire-protection doors generates just 20 kilograms of process waste a day – far less than the 150 to 160 kilograms produced in the past. Production is more automated, the process is leaner, and traceability and reproducibility are ensured across the board. In the event of a fire, the glass withstands flames and heat over 1,000°C for up to 120 minutes, as required by the given fire regulations. Dr. Holger Wack and Damian Hintemann of the Fraunhofer Institute for Environmental, Safety and Energy Technology UMSICHT and Thomas Baus of Hörmann KG Glastechnik are to be awarded the Joseph von Fraunhofer Prize for this groundbreaking development.

Fire protection glazing contains a transparent gel rich in water and electrolytes between two glass panes. If a fire breaks out, the pane facing the flames does not withstand the high temperature for long and shatters. This actuates two mechanisms: For one, the water in the gel evaporates and cools the intact second pane. For the other, a heat-insulating salt layer forms. The Fraunhofer researchers first combed their database to screen for gels that could be suitable for this sort of fire-resistant glazing. Some 60 attempts failed. Compelled by thoroughness, they tested a basic component that, as the theory goes, would never work. “But it does,” says Wack with a smile. The researchers are reluctant to show their hand. “The project had a few instances like this when something worked that clearly shouldn’t have,” is all Baus is willing to say on the subject.

Four years from beaker to business 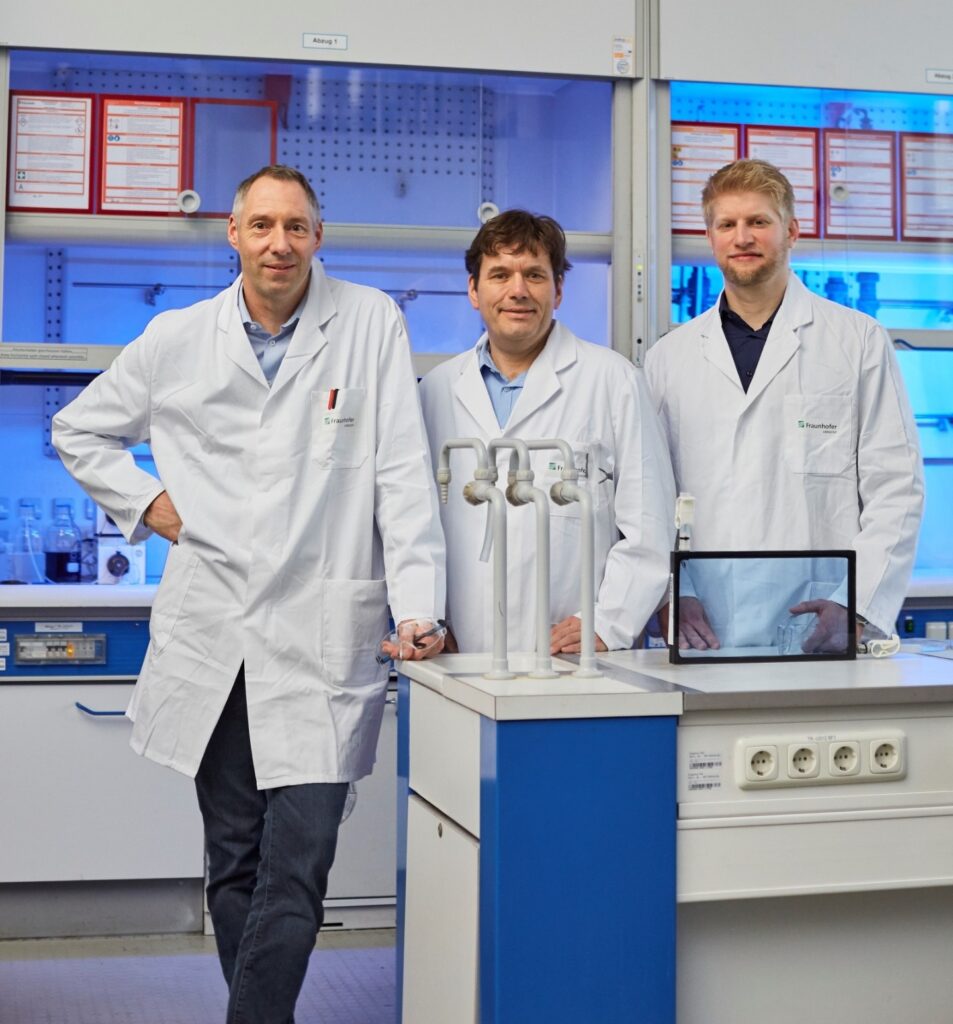 The project was auspicious from the start. The first fire test the researchers carried out after a short time in development already showed promise. The glass held up to a 30-minute fire performance trial. The researchers then scaled it up from the beaker to a demonstration cell at Fraunhofer UMSICHT. “We were able to take the idea out of the lab and into a practical application within just four years – a very short time for the development effort that goes into end-to-end process engineering. Implementation time is usually ten to twelve years,” says Hintemann. The Hörmann family decided to spin off Hörmann KG Glastechnik in 2016 on the merits of this successful development, building a new plant in Saarland where the fire-resistant glass is now produced. The jury was particularly impressed with this implementation of research results into practice and, on a related note, with the outstanding collaboration between Fraunhofer UMSICHT and Hörmann. “We did more than merely develop fire-resistant glass,” says Baus, emphatically. “We reinvented the production of fire-resistant glass.”

Production doubled in half the time