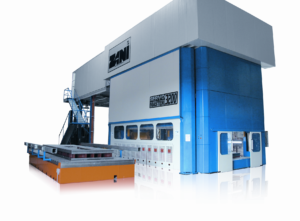 The challenges that today’s market requires in the sheet metal forming machines field, push companies to increase more and more the size and complexity of the systems. So here is coming for ZANI the biggest press ever built in its history since 1960. This is a servo transfer press of 32.000 kN nominal force with bolster dimension of 7000x2500mm and a total weight of more than 1.000.000 Kg. The mechanics of this press is moved by the combination of several Siemens servomotors all with direct drive and with a total installed power of nearly 2 megawatts. Thanks to its powerful motorization the press, with a maximum slide stroke length over 700mm, is able to reach a speed over 30 spm. Despite the installed power is high, the press reduces its consumption thanks to an energy management system mixed with capacitors and motors flywheel. These last are placed in the foundation to a depth of more than 5m from the floor level. The energy is stored during the phases of the free movement of the slide and then released when it is required during the phase of the real forming execution. The slide motion profiles are infinitely programmable and that makes this giant extremely flexible: the press indeed will be used both for productions in transfer mode and for progressive dies as well, stamping high-tensile strength steel now become necessary” in the automotive field.