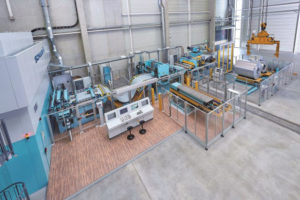 Using laser beams instead of heavy dies: Daimler has commissioned two laser blanking lines at its Kuppenheim plant. Both the lines, which are meant for the serial production of compact vehicles, can be changed instantly to another cutting style at the touch of a button. The programming of the contours is done offline and can be simulated for production optimization. By dispensing with the dependence of heavy dies, the pressing plant is optimally prepared for different types of upcoming car models in the next years.

Three laser heads, working in tandem, cut contours in the system at a speed of more than 100 m/min from a continuously fed steel or aluminum sheet directly from the coil. This will yield surface-sensitive pre-cut parts for mudguard, side parts, roofs or engine hoods. The conveyor moves through the system at a speed of up to 60m/min. The cut blanks are separated from scrap and stacked continuously. In addition, two modern Schuler press lines in the hall form these pre-cut blanks into chassis parts, which then are assembled in adjacent Mercedes-Benz Rastatt plant. 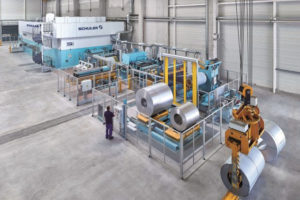 This high flexibility of cut programming offers various options with regard to geometry. The premium OEM has already started to exploit the potential of savings materials or optimizing the forming process. Even production efficiency can be achieved in future with laser-optimized blanks, and best possible contours can be developed.

Normally blanks are stamped by using blanking dies that weigh upwards of 25 tons. These dies cost up to 200,000 Euros each, and this does not even include storage, repair and maintenance. If there is a new model in the market, the form changes and refit or new installation of the dies lasting few months is inevitable. In contrast, the laser blanking lines from Schuler do not have such dies. 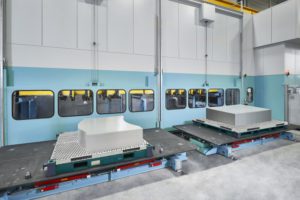 In addition, space requirements in the earlier coil hall of the plant were not suitable for conventional blanking lines. The decision to go for this new technology, which is marketed by Schuler under the name Dynamic Flow Technology (DFT), was heavily influenced by the fact that the laser systems do not need expensive foundations or a basement.

Cost efficiency is a major factor for an OEM: An investment must – compared with alternatives – provide a positive benefit for a vehicle. The prospects are very positive for laser lines: not just due to easier assembly and freedom from heavy dies, but also due to high system availability. Options to save materials and to reduce coil differences often lead to lower production costs with Dynamic Workflow Technology than with conventional blanking systems.
.