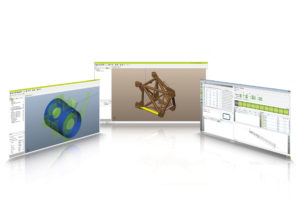 Today, 3D laser (tilt) cutting is a reality regardless of the resonator technology (CO2 or Fiber), for straight or bent tubes up to as large as 610 millimetres (24”). The LT8.10 automated laser tube cutter from Blm Group satisfies the accuracy and quality needs for cutting straight tubes and doing non-orthogonal cutting such as weld preparations.

It is the optimal machine to enter the laser cutting world for tubes of up to 120 millimetres (4.75”) in diameter. It is also available in ‘round-tube-only’ configuration for fast, clean and cost effective straight tube cut off that beats traditional sawing or shear type cutting systems.

The LT-FREE five-axis laser cutting system developed by Blm Group ensures top-notch flexibility and simplicity of use for cutting 3D parts in different shapes. Bent tubes, flat and drawn sheet metal, hydroformed components and welded assemblies can pierced and trimmed simply and accurately. From the raw tubes to the finished part in one step.

Tube processing system integration is a specialty of Blm Group. The Group’s extensive experience and deep knowledge of bending systems, laser cutting and forming is exploited to integrate multiple machines with the goal of cutting the time needed to make a finished part. The software is the key component that makes it all work. Software for automatically creating laser cutting and bending system programs by importing a 3D model of the finished part or for managing the interface between systems to make the part right from the start.

Artube is the Lasertube parametric 3D CAD-CAM programming system. It is cleverly designed to fully exploit all the potential of each system. Three-dimensional file import, special profile management and fully automated programming (to create part programs from an imported file without the need for additional programmer interaction) are just some of the most recent developments of the software developed for use on all Lasertube systems.
One particular innovation is the ability to import a file of a bent tube and then use the ‘cut-and-bend’ techni 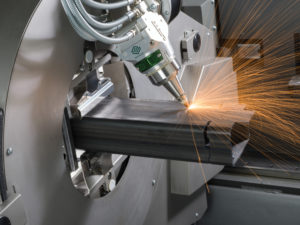 que on the laser to make a bent part with the laser system instead of a bender.

E-FLEX is the single head wire bending system that joins the DH double-head systems and completes the line-up of wire bending machines.
With the outstanding flexibility provided by the double turret bending head, E-FLEX can make complex 3D parts which are not excessively developed in height.

One of the strengths worth mentioning is the VGP3D programming and simulation software used on all bending systems of the Group. It has no equals in the industry.