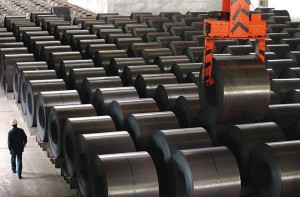 American Steel Manufacturers Association, together with steel associations of Mexico, Latin America, European countries, Brasil and the Committee on Pipe and Tube Imports released a joint statement regarding concerns about China’s attempt to gain market economy status in December 2016:

“The global steel industry is currently suffering from a crisis of overcapacity and the Chinese steel industry is the predominant global contributor to this problem. Estimates from the OECD Steel Committee indicate that there is almost 700 million
metric tons of excess steel capacity globally today. China’s overwhelmingly stateowned and state-supported steel industry has an overcapacity ranging from 336 to 425 million metric tons and it is expected to grow in the coming years. This situation,
together with a declining steel consumption, has resulted in record levels of steel exports from China to the rest of the world in 2014 – and which are on track to exceed 100 million metric tons this year. China has claimed that it should be automatically accorded treatment as if it were a market economy after the 15th anniversary of its accession to the World Trade Organization (WTO) in December 2016. We disagree.

“It is the view of steel producers in Europe and North and South America that China’s Protocol of Accession to the WTO does not automatically require governments to treat imports from China as if they were from a market economy country as of December 2016. While one small part of Section 15 of China’s Protocol (subparagraph 15(a)(ii)) expires on December 11, 2016, the remainder of Section 15 will remain in effect. These remaining provisions allow WTO members to treat China as a non-market economy country unless the Government of China or Chinese producers can show that they operate under market economy conditions.

“Given the continuing significant role of the Chinese government in many key aspects of the Chinese economy, and especially in its state-owned and controlled steel sector, there can be no question that China remains very much a non-market economy today. For the steel sector, recognition or treatment of China as a market economy at the end of 2016 would coincide with the peak of Chinese excess steelmaking capacity, and record level of exports to international markets, including the US, the EU, and Latin America. Given the enormous economic and social impacts that will result from the premature recognition of China as a market economy, we urge governments around the world to undertake a comprehensive assessment of the continuing role of the state in the Chinese economy and industry, as well as an assessment of the impact on industries around the world, if China were to be treated as a market economy before it made the necessary reforms to ensure that market forces were in fact allowed to operate fully in the Chinese economy.”