There are several different types and formulations for release agents used in the cold box process. In highly stressed areas of the core box, traditional release agents do not function well. A new resistant release coating based on novel technology that adheres to the core box has been developed and introduced into foundry production to combat resin wipe-off. Trials were run, monitoring the number of cycles before the release coating needed to be re-applied. Data is presented from the trials. The testing shows the coating to be effective up to several hundreds or even thousands of cycles between applications.

100% active release agents are based on proprietary silicones, and so they contain no VOCs (volatile organic compounds). Another advantage is that they are not flammable. They are very concentrated, and typically used in high production foundry environments. Multiple releases can be achieved from a single application, possibly up to 20 cycles before re-application. They have a higher up-front cost, but do not have to be applied as often, giving them a lower cost-in-use. One major disadvantage is that they can be over-applied, leading to gas defects, excessive build-up, and failure of the coating to adhere to the core or mold.

Solvent-based release agents are made up of various solvents and active ingredients, primarily silicones. The different solvents include those that are flammable, combustible, and VOC-exempt. Due to the nature of the solvents, these release agents dry fast. They do not build up as quickly as 100% active release agents because they contain less silicone, making them easier to apply. Multiple releases can be obtained by a single application, generally up to 4 cycles. One disadvantage is that they are flammable. Unlike 100% active release agents, solvent-based ones contain VOCs (unless they are formulated with a VOC-exempt solvent), which tend to be pricey.

New Release Coating
A new release coating has been developed that replaces traditional, liquid-based, spray release agents. It has excellent release properties. It avoids the adhesion of resin and sand to itself, eliminating resin wipe-off. It is hard-elastic when dry, and resistant to the abrasive impact of the sand in core production. An additional release agent is not required. It does not affect the cores or build up in the core sand. When the core box is not in production, the release coating should be removed by ice blasting. It should be then re-applied to the tooling before being put into storage to protect it.

Testing in the Field
Two core boxes were selected for testing in a foundry setting. One was a cylinder head water jacket, and the other a cylinder head exhaust system. The current release agent in use was applied at 4–6 cycles. First, the core box was shot blasted to remove any adhering resin, sand, oil, and release agent. Then a spray bottle was used to apply a primer to the core box surface, which takes less than 1 minute for a 1m² surface area. The semi-permanent release coating was applied to a dry core box surface by spray gun with a nozzle minimum of 0.14 mm at 5 bars (73 PSI). 40 grams of the release coating were applied to the cylinder head water jacket in 10 minutes, and 40 grams of the release coating were applied to the cylinder head exhaust system in 7 minutes. A thin coat of 30–70 µm was achieved. The dry coat is approximately 50% of the wet coating thickness. As a side note, the lifetime of it is increased exponentially with the coating thickness. By doubling the coating thickness, a 4-times higher lifetime can be expected. Release coating that was inadvertently applied to the box print area was removed with cleaner directly after spray application. The release coating on the water jacket polymerized in 2.5 hours whereas, on the exhaust system, it first used after 12 hours. It is important to note that this difference in time was due to this test being run in a real-world environment. The exhaust system was coated and not run until the following day. Curing is required to allow the release coating to polymerize. 85% polymerization is required. This is achieved within 2 hours. Humidity and ventilation improve the hardening process (Figure 1).

Production did not have to stop to clean the tooling. No additional traditional release agent spray was required. On the cylinder head water jacket, the release coating lasted 1,527 cycles, and on the cylinder head exhaust system, it lasted 1,600 cycles.

Conclusions
The tests confirm that there are significant advantages to using a release coating in highly stressed areas in cold box core production as opposed to a traditional release agent. The release coating is a dry system. Resin, sand, and release agent sludge, most commonly referred to as resin wipe-off, do not build up. 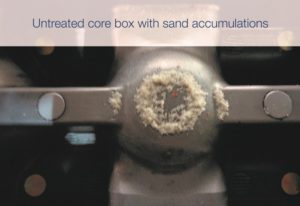 This system allows for a tight core box, thereby reducing flashing. The release coating thickness is only limited by the requirements of dimensional accuracy. It allows for constant function of the core box because the vents and ejectors do not malfunction. The core is not contaminated by the release agent, lowering the risk of casting defects. Production stops are avoided, leading to higher productivity and higher output. There are no emissions of oil or solvent in production. It also protects the tooling against wear, lowering tool replacement costs. Traditional release agents need to be re-applied within 20 cycles. The release coating lasts far longer into the hundred of cycles range before re-application is needed. It allows for lower cost, higher output, and better quality.