The new partnership between Lockheed Martin and Boeing, has started sending Atlas V rockets into orbit using several 3D printed parts made from advanced thermoplastic materials developed for them by Stratasys. Not only do these 3D printed parts shave critical weight off of the rocket, they often significantly reduce the cost of manufacturing them, which is vital when dealing with non-recoverable spacecraft like the Atlas V. 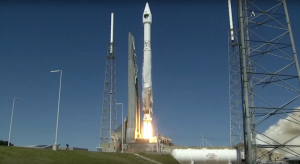 Spacecraft manufacturers like United Launch Alliance usually do fabricate a lot of the components and parts used in their rockets in-house, though a large number of them are simply purchased from third party manufacturers and brought in. That involves purchasing thousands of parts and verifying that each one has been made with the exacting standards required by the aerospace industry. Additionally, these parts then needs to be assembled, also within the strict standards of the industry. Not only does that take more time, but it can get costly in both parts and manual labor. Recently, ULA partnered with Stratasys to develop 3D printing materials that were strong and durable enough to replace more expensive, traditionally manufactured metal parts.

The recent successful launch of the Atlas V has proven the viability of using lightweight 3D printable thermoplastics for many applications usually made using metals. The rocket has several of these 3D printed parts, primarily for an air ducting system in the rocket’s payload fairing that keeps vital electrical components cool during the launch. The parts included brackets, nozzles, panel close-outs and huge printed sections of ducting. Because many of the parts could be printed as large, single parts rather than smaller metal parts that would need to be assembled, 3D printing reduced the number of components in the ducting from 140 parts down to just 16.