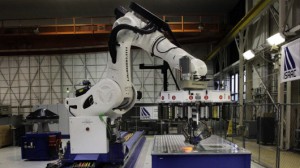 Described as “a paradigm shift”, ISAAC is intended to remove a bottleneck currently hindering work at Langley. According to Brian Stewart, integration manager for the project, the facility is good at concept development, analysis and simulation, and structural analysis, but fabricating composites was not one of its strengths. What was needed was a versatile, flexible machine that can change functions quickly.

The solution was ISAAC, which started life as a KUKA standard industrial robot, which has been fitted with a large, detachable, disc-like head holding up to 16 spools of various types of carbon-fiber ribbons. This allows ISAAC to not only swap quickly between materials, but to also change heads so it can take on an entirely different function. 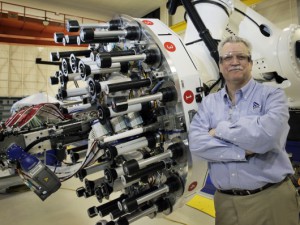 Brian Stewart, the system’s integration manager, poses with ISAAC (Photo: NASA/David C. Bo…
The idea is that the ribbons are made up of partially cured resins mixed with carbon fibers. According to NASA, more conventional composite manufacturing requires these ribbons to be laid down at one of three angles – 0 degrees, 45, or 90. However, ISAAC’s arm and manipulator disc allow it to not only follow complex curves while laying down ribbons into sheets as it lays one layer on top of the other, but to also quickly switch to a different ribbon to create a stronger, lighter material that can be quickly tailored to match precise aerospace specifications at lower costs.

NASA says that this versatility will not only help in creating better composites, but it will also speed up the prototyping process as well. As ISAAC begins work on the Aeronautics Research Mission Directorate’s Advanced Composites Project and the Space Technology Mission Directorate’ Composites for Exploration Upper Stage, it will not only be able to create scale models for wind tunnel tests, but even fan blades for the wind tunnel itself. In addition, the Langley team is also working on ways that the robot can be employed in building metal components.