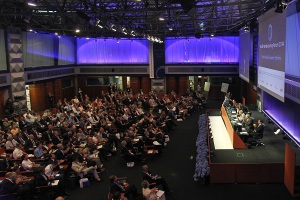 With 450 participants in two days, the third edition of the World Manufacturing Forum, in Milan, is deemed a success, due to its organization and the positive feeling that has permeated speeches and opinions by the attending managers. Manufacturing sloughs its skin and starts growing again.

«If there was an instrument to measure the level of confidence and optimism, well, undoubtedly its indexes during the World Manufacturing Forum 2014 would have been very high». With this joke, the scientific chairman of WMF Marco Taisch, professor at Milan Polytechnics, commented the positive trend of the last edition of the event, held at Piazza Affari. «I was struck», he said, by the change of accent and tones perceivable in the majority of speeches. In the previous forums at Cernobbio (2011) and in Stuttgart (2012), managers’ propensity was half way between caution and the regret for the past glories of industry, which will probably never return. This year has been inspired by trust, purposeful and proactive, aware of the fact that in the United States and in Europe the manufacturing industry plays a primary role». Not all analyses and statistics succeed in describing punctually the turning point in course, we will see, but this undermines neither the generalized optimism of the sentiment nor the reality of facts: «We sometimes do not consider the positive effect that the manufacturing industry exerts on the labour world», stated Taisch, «because each workplace created in the segment results in the generation of a good two in related services and induced activities. Neither, on the other hand, we duly consider the deep transformation that the field is living, characterized by digitizing and the birth of new professionalisms». Perhaps, on a European scale, the breathless locomotive is the Italian one, damaged by labour standards whose change is deemed crucial for the recovery by the continental CEO interviewed by Deloitte on another occasion. «We should wonder», pondered Taisch, «what would happen to the national economy if the Country did not own such a solid hard core of manufacturing production». Among the issues of higher relevance in the two days of the Milanese meeting, Taisch underlined robotics, «seen not as a menace for the workers who might be replaced by machines but in a prospect of collaboration between man and assistant-robots of refined intelligence». Provided with broader and broader skills, they can free their colleagues in the flesh from the minor value tasks, leaving instead space to a generation of highly specialized professionals. That contemporary business puts every day entrepreneurs in front of new challenges is witnessed by the attention paid to the cyber-crime phenomenon and then to safety. «It is the other side of the manufacturing growth», said Taisch, «with masses of data growing upstream and downstream the production chain and rising risks of losing the intellectual property that patents are no longer able to protect against piracy. Just on the manufacturing – and not on banks and finance – were concentrated 26% of the most recent hacker attacks, according to Ibm, and this represents a deadly danger in a panorama where are spreading the concept of Internet of things and smart mutually interconnected products. In the defence of this system, an important role is entrusted to the big players that took part in Wmf, like Finmeccanica, Ibm itself and Siemens, because, to grant safety to the global industry, rules are no longer sufficient, we need a step forward in technology».

The european industry and the change challenge
Essentially the same as in 2012, the figures by The European house – Ambrosetti have not been obviously influenced by the optimistic mood mentioned by Taisch. They are useful, however, not only to highlight the criticalities that hinder the new manufacturing ascent but also its decisive importance. Certainly, according to the estimates presented by Valerio De Molli, managing partner of the company, the growth rate of the continental productivity has been the lowest in the whole planet since the beginning of the century and 2012: +11% against 25% of the United States, 17% of Japan and the impressive Korean +58%. Anyway, the reason why a bet on the manufacturing might prove apt, lies in the fact that the segment witnessed its weight growth by 38% in the same period. The surge of the relationship between GDP and hours of work sees the manufacturing industry of the 28-States Europe at the second place behind South Korea. It contributed by 60% in the EU productivity progress in 2012 and in 2013 it was worth 74.7% of overall exports; 63.8% of the investments in research and development; 15% of the added value generated. Besides, last year more than 14% of the available labour force was employed just in this area. The comparison between the Eurozone and the other industrial powers in the ambit of productivity indexes offers a clear portrait of the situation. Since the outburst of the crisis in 2009 until January of the current year, only those of United States and Korea have lived an uninterrupted ascent. The Japanese one lived its worst time in 2011, year of the Fukushima catastrophe, and then it restarted its ascent, the 28-nation Europe one settled at half 2010 and then proceeded much more cautiously. For the enlarged EU, the target of a GDP composed by manufacturing activities by one fifth is only apparently within reach: today we are around 15% but at the beginning of the decade this threshold had already been surpassed (15.2%) and 14 years ago the mean was by 18.5%. In the period between 2010 and 2013 Italy increased its distance from the target; exceeded by Germany together with, among the others, Latvia, Slovenia, Slovakia, Czech Republic and Romania. The growth of the manufacturing added value in case of achievement of the target 2020 would grant a business worth 841 billions to EU, creating 15.5 million employments, according to Ambrosetti. 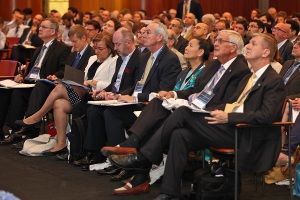 The competitive advantage in key-sectors
In line with what analysed until now, De Molli talked about a deficit in the productivity growth in the main industrialized European nations. With good reasons: ignoring the +91% of output for each hour of work of South Korea, the European driving engines are neatly under the stars and stripes +53%. From 2000 to 2012, Germany did not surpass the 33% increment; United Kingdom and France respectively stopped at 30 and 25; Italy much lower, a poor +8%. The Old Continent has maintained its competitive advantage in comparison with the American vis-à-vis in only two high tech fields out of eight. We should anyway underline that they are the crucial defence-aerospace and pharmaceutical ones. The speech by Valerio De Molli analysed also the discrepancies that separate the various Countries of the Continent on central issues like the energy cost for industry, the expenses for the establishment of an activity; last but not least, the interest rates on loans to non-financial organizations. In Germany, taxes and duties weigh on energy fares in almost identical way as to what calculated in Italy; nevertheless, here the price is by about 0.22 euros per kilowatt-hour; in Berlin, it does not exceed 0.18 Euros. However, De Molli pointed out, if Merkel company adopted Sweden’s model, where each kilowatt-hour costs less than 10 cents, of which only 2 go to revenue authorities, the yearly saving of the manufacturing industry would be of 17.1 billion Euros. Equal instead to 4 billions per year would be the saving of the segment enterprises if the burdens for the setup of a company were identical to Slovenia’s: 90 Euros. The three-color rate table, with its 3,655 Euros, is instead unequalled among the industrialized, and potentially driving, nations. Italy might construct a treasure worth 16.4 billions per year, finally, following the French example on the interest rates, beyond the Alps slightly above two points and here instead equivalent to more than the double. As anticipated by Taisch, also The European house agrees about the fact that the manufacturing is changing its face: in its turnover, services – pre and after sale; design; research have in fact gained a growing weight from 2000 to 2012. Besides, it takes off the phenomenon of the companies involved in the global value chain in three ways simultaneously: as importers, exporters and international producers. They are a minority in comparison with the total but they highlight the highest growth rates of the labour force and of graduate presence (15%), besides an added value of 20 millions. The added value produced by the companies that just execute two of the mentioned global activities (import, export, production) is worth slightly more than one third of that amount.

Changing the course
To change the direction and the sign to the vicious stagnation circle to which we referred at the beginning, De Molli and Ambrosetti wished the removal, within the EU, of the physical, technical and tax barriers that divide the Union Countries in energy, telecommunication and transport ambit. They hope at the same time in an alignment of the energy fares, together with the reduction of bureaucratic burdens and the introduction of common standards. Last but not least, it would be advisable a mechanism of simplification for the transfer of capitals, especially among branches of the same bank groups, to override disparities on interest rates. In more purely political terms, the wish is a re-discussion of the commercial agreements with strategic areas such as Vietnam, China, India and Thailand and a realignment of the customs barriers to exports, in virtue of which the sales from the EU to Asia might rise by 325%, even from today until 2025. About the importance of a healthy manufacturing industry has discussed, on behalf of McKinsey & Company, also the global co-leader of the company’s manufacturing service line Katy George, bringing virtuous examples from the United States. The new frontier of industry is, according to George, the so-called next-shoring, a positioning in less competitive geographical areas in terms of labour cost in comparison with the first de-localization ones. Anyway competitive by innovative capability, competences as well as growth potentialities and widening of internal markets. The States themselves owe their recovery mainly to the manufacturing industry, even better to four of its specializations. Metal and raw material machining created, from 2010 to 2013, over 220,000 engagements; other 291,000 came from automotive, transports and machine tools. Certainly, in the car supply chain the number of plants tripled in Asia, where from 2001 to 2011 factories grew by 33% and employees by 57%. Western nations must give birth to a new ecosystem, betting on technologies and methodologies that range from Ict to robotics and to additive manufacturing or to the biotech research. The proximity to the demand and the innovation residing in the next shoring will trace «the new trajectory». 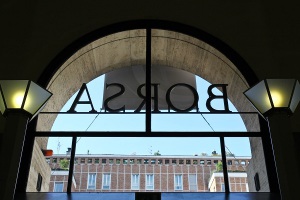 The globalized word as cooperative environment
The conclusive part of the second morning of the proceedings at WMF 2014 broadly treated the standardization issues, resulting anyway in a debate about the collaboration opportunities among parts of a production chain or among different production chains, in the scenario of a globalized industrial panorama. The technology futurist by Autodesk Jordan Brandt has for instance highlighted the crucial role that the 3D printing might play with a series of hubs widely disseminated in the world. In addition to that, it has anyway pointed out how in the era of big data and of cloud environments, the homogeneity of the large amounts of information and their readability by machines is, looking at automation, one of the critical issues to be solved. 3D technologies also open an easy low-cost way to experimentation and prototyping, concretizing the dialogue among laboratories positioned at thousands of kilometres of distance. According to Manuel Montoya Ortega, from the automotive Mexican cluster of Nuevo Leon, the standardization challenge resides in the integration and storing problems of big data that are now more and more central, because regarding the whole life cycle of products. The boost is towards a strong coordination among design, production, subcontracting and customers; and towards the inter-operation of the data that rule business processes and systems. Besides, we need an ecosystem that supervises standardizations by creating common solutions for problems shared by a variety of industries. This is for instance the role of clusters that, according to Montoya, represent a triple helix model that includes institutions, research poles, enterprises and academy.