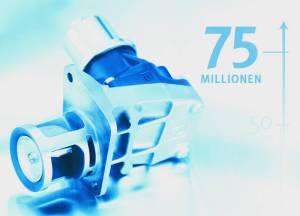 The assembly line at Pierburg S.A. in Spain’s Basque Country has exited the 75 millionth exhaust-gas recirculating valve (EGR). Pierburg GmbH’s Spanish plant ranks as the lead facility for such valves and since 1994 annually has turned out an average of around five million units destined for gasoline and diesel engines.

The job of the EGR valve is to regulate the re-routing of exhaust gases into the engine. Fueling the success of this emission-abating component have been the worldwide ever stricter emission standards. Diesel-engine cars starting from Euro 1 have an exhaust-gas recirculation system, and on vehicles as from Euro 3 such a system is mandatory. As from Euro 4, cooled recirculating exhaust gases have become increasingly necessary and as from Euro 6 low-pressure recirculation has been added to the high-pressure variety. Within this context and parallel to exhaustgas recirculation, the matching EGR valves have been further developed into a firm fixture of tomorrow’s engine generations. The newest EGR valve is of very compact, low-weight design and since 2013 has been used on series-production models of a major German OEM.

Says Javier Egurrola, in charge of the Basque Country Pierburg plant: “We’re proud to have set up a production record with our 75 millionth exhaust-gas recirculating valve. In the history of EGR valves we have repeatedly responded to the rising quality demands of the marketplace and, in fact, we’ve grown in and through our efforts to address the rising requirements set by environmental codes and standards. To arrive at these figures and maintain the standards of quality we have, there are many influencing factors. The most important one however, from my point of view, are the people who designed and produced the valves and I would like to thank them.”

The EGR valve regulates the recirculation of exhaust gas in the engine. Fueling the success of this component for abating engine emissions were most especially the globally ever stricter emission legislations. Since 2005, Euro 4 has applied in Europe, since September 2009, Euro 5, and meanwhile Euro 6 with again tighter limits for nitrogen oxides. For six years now, the strict SULEV standard has been in force in the United States. “Under these circumstances, along with external EGR we are also developing the related valves and modules which will be indispensable on future engine generations,” explains Michael Pachmann, head of the Automotive Emission Systems business unit.

Another option for complying with strict nitrogen oxide limits is external recirculation of the cooled exhaust gas. For this purpose, the business unit has devised complete EGR modules remarkable for their outstanding long-term cooling effectiveness combined with compact dimensions. The materials used and the configuration of the exhaust-gas cooler are tailored to customer needs and allow a coolant-caused reduction in exhaust-gas temperature of up to 400 degrees Centigrade, depending on engine operation. Hence, external EGR not only helps lower combustion temperatures and nitrogen oxide emissions, it also lessens the heat load on the downstream engine components.

To ensure compliance with Euro 6, an even higher rate of EGR is needed, and this is made possible with the business unit’s specially developed low-pressure EGR valves and systems. Hence the business unit has a versatile product portfolio that can be applied to again reduce emissions and fuel consumption on the I.C. engines of tomorrow.