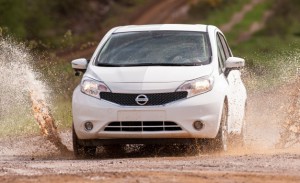 Nissan is refining a new nano-paint treatment that repels dirt and grime from car body. The prototye is being tested by putting the car through the dirty wringer to see how well it holds up in the real world. Car washes are time-consuming and/or expensive, but also a short-term solution. How many times do you roll that dripping, glistening car out of the car wash parking lot only to hit a muddy puddle or rainstorm within the first day or two? A self-cleaning car is a great inventions!

The super-hydrophobic, oleophobic industrial coating launched by Nissan is called Ultra-Ever Dry. The treatment is designed to repel all water-based and some oil-based liquids using a protective top layer of air. When a car runs through a muddy puddle, the treatment will purportedly prevent that mud and road grit from sticking to the body, keeping it car wash-fresh. Nissan Europe is testing the Ultra-Ever Dry in a variety of conditions. By now the treatment has performed well in rain, spray, frost, sleet and standing water. 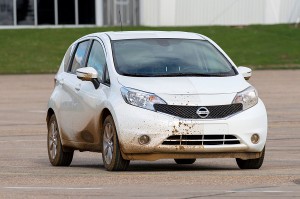 Ultra-Ever Dry was launched in 2012 and was sold and marketed by Florida-based Ultratech International. The company staged a “phase II” launch earlier this year and says that it’s improved the formula, pricing and distribution. It demonstrates the treatment being used for all kinds of applications, from clothing and footwear to building materials. In addition to repelling liquid itself, it can be used for related purposes such as anti-icing and anti-bacterial treatments. The Japanese manifacturer is not currently considering introducing the treatment as a standard in its line-up. Instead, it sees the opportunity to offer the coating as an aftermarket option.

Ultra-Ever Dry is a superhydrophobic (water) and oleophobic (hydrocarbons) coating that will repel most water-based and some oil-based liquids.