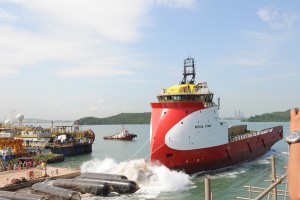 Let’s say for some of us in the world it has been a great start of the year! The Singapore Region has witnessed the launch of the first Platform Supply Vessel (PSV), namely Britoil Power, built at P.T. Britoil Offshore Indonesia in Batam, a shipbuilding yard in Indonesia fully owned by Britoil Offshore Services Pte Ltd. The launch took place on 6th January 2015. Britoil Power is equipped with DP 2 system, 850m² deck and has accommodations for a crew of 60 people. This vessel is capable of storing a variety of liquids, including fuel oil of 1,450m³, portable water of 1,050m³, liquid mud of 1,300m³ and dry bulk capacity of 250m³. With the assistance of their state-of-the-art panel line from Finland and the highly efficient bending machines from MG SRL Italy, the total construction time taken to complete this world-class platform supply vessel is approximately 18 months. 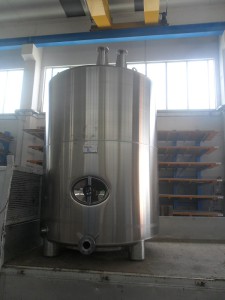 Britoil Offshore Services Pte Ltd was formed in 1988 and operates as a global provider of marine transportation and anchor handling vessels focusing mainly on executing complex oil and gas projects worldwide. Britoil’s mission is to be the most respected world class offshore service vessel provider and aims to achieve operational excellence by putting their customers’ need first.

Britoil takes pride in its vessels and sees through every detail during the process of design and construction so as to achieve the highest standard in quality, performance and comfort for their crew. They are constantly looking for and introducing sophisticated manufacturing equipment into its existing production line for this reason.
Previously Britoil had purchased vessels from local shipyards in the Far East and China, but soon it was clear that the poor quality of materials, workmanship co-operation and delivery, were not up to expectations. That’s why the company decided to set up its own shipyard. At the moment an impressive fleet of thirty modern ocean going anchor handling tugboats is operated by Britoil followed up by a versatile light product tanker especially equipped to support Britoil’s other vessels during long distance offshore and pipeline transportation activities.
Competitiveness and long-term experience show that you have to work with highly reliable partners to obtain a satisfactory final product. Mr. David Hill, Britoil CEO, states:  “To enable us to build such vessels in our own shipyard, we have had to purchase some more sophisticated manufacturing equipment from Italy, Germany, Finland and the United States. After doing a careful study of all the rolling machine and section bending machine manufacturers in the world Britoil selected MG in Italy as being able to supply the best and most suitable machines for our needs, and selected an MH 325 M 4 roll machine that can roll 3 m wide plate of 25 mm thickness, but has been able to roll 40 mm thick plates very easily. We also purchased an AR 200 section bending machine that is capable of bending variable radii pipes and bulb sections up to 280 mm, as well as a smaller AR 110 section bending machine for bending smaller profiles. These three machines together were more than capable of rolling and bending everything required for the construction of our PSV’s.” 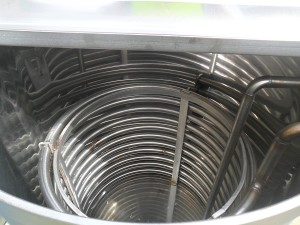 MG is sited in Fossano, in the North West of Italy, with a commercial office for the Italian market in Santa Maria Nuova, near Forlì,  in mid Italy, and is now among the leading rolling machines manufacturers in the world. It was established in in 1959 in the field of industrial automation. In 1981 MG began the construction of plate bending machines. Today the company can answer to any kind of demand on plate rolling and offers models with useful length from 500 mm up to 8000 mm and thickness from 1 to 300 mm. Besides its core business in plate rolls, MG started its profile bending machines production.  MG typical geometry shows up with gearboxes directly coupled on rolls, bearings and hydraulic motors, without secondary elements, reducing frictions to minimum. Thus, the machine energy goes all into the bending, no waste of power in between gears. The model MH 325 M is endowed with central and side supports for large diameter plates. AR 200 has a traction tool and special rolls for bulbs from 100 to 280 mm.  AR 110 has got special rolls for bulbs from 60 to 140 mm. All have the MG born CNC Touch Command EVO, the most accurate automatic bending system and, at the same time, easiest to use on a bending machine. Evolution goes on here, as well. Entirely developed on Real – Time Linux platform by MG partner software company Delsy, owned by Daniele Albenga, it is generated following the real machine geometry. The system is close loop with a going on dialogue between the CNC and on board machine sensors. The CNC reads the values and, if necessary, corrects them in real time, this means total control and no material waste. The system adapts to the different type of materials, the operator can choose the shape he needs and can get it with the simple input of base parameters. It controls accessories such as central and side supports, motorized tables, squaring arms and loading systems and can be endowed with remote assistance, thus to be directly managed by our engineers, for a precise, smooth and constant aftersales care.

Mr. David Hill points out “We must always remember that it is of paramount importance that we keep our Clients satisfied at all times so that they will continue to charter our vessels and give us preference over other operators”. This is the same philosophy distinguishing MG. Mr. Massimo Roccia, one of the Italian Company owners together with Mr. Giorgio Giraudo and Mr. Francesco Barca, states: “It is of great importance to offer professionalism and high quality standards. In the last years the market has been invaded by low quality and low price products and services, the economic crisis is pushing people to choose the cheapest solution, but I do not think this can be long – term worth, that’s why we have to stand as a reference point”.

We jump from Singapore to Cuneo where a couple of Companies are making interesting jobs with some MG models. RACCA IMPIANTI SRL is on the scene from 30 years now, in Italy and abroad, Mr. Claudio Racca and his sons, Emanuele and Marco, and daughter Erika project and realize industrial systems for the chemical and food industry, with a continual technological research and a constant effort. Racca SRL acquires three new 4 roll bending machines, and one section bending machine. With models MH 308 R, MH 206 P and MH 106 P/RR the company can now perform different bendings starting from a 3000 x 8 mm going down to minor thickness. Talking specifically, MH 308 R is endowed with Touch Command Evo and central support for large diameters. “I’m satisfied of the machine, with it we realize large pressure tanks” – says Mr. Claudio Racca – “Touch Command Evo with the close loop system monitors the bending all the time and we have thus a full control of how the cycle is evolving. Especially with multiple radii, we see a perfect transition from one radius to another. With the CAD system we can design the shapes we need to get directly on the control itself, or, we can load them on DXF file.” Also, the machine, with its conical bending device, is good to make 1500mm large piping systems with a thickness of 6mm. “The flanging and reinforcement workings are made with the section bending machine AR 110. With this we bend pipes with a ½” diameter up to 5”, flat bars from 40x40x10mm to 110×25, squares 90x5mm, 100mm U bars, angle bars from 40x5mm to 90x10mm, 140mm HEA beams.” Goes on Mr. Racca. 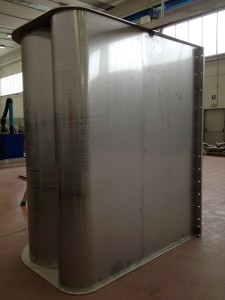 Another prominent company is TOMATIS LAMIERE SRL. Founded by Mr. Vittorio Tomatis in 1963 and managed now by Mr. Danilo Tomatis and Mr. Giovanni Blengino, has acquired a vast experience in metal supplying. In its 12.000 square meter plant several different ranges of material are stored, from the standard to the most peculiar ones, like special and hardened steel. The national and International demand is in the hands of a professional team of experts. Since 2004, the company has enlarged its offer with laser cutting and plate bending. In 2012 Tomatis buys the first plate bending machine, it is model MH 322 D, with a working width of 3 m by a thickness of 22 mm.  This one as well, is working with Evo and, following the words of the end user, Mr. Blengino: “It grants the possibility to work multiple radii with a speed and precision we have never seen before.” After about one year, the company decides to acquire another machine. Model M 4508 C, 4.5 m length for a bending thickness of 8mm, is part of the new range of models.

MG machines are the result of a continuous research that has lead now to an increasing versatility and improved performance. MG is proud to announce the new plate models, M 4 rolls, G 3 rolls, F 2 rolls, even stronger and more reliable, thanks to more powerful cylinders and motors, offering better results in cylindrical and conical workings. Tomatis Lamiere buys MG again because: “They are near us, but this is not the main reason, the fact is that MG works like us. It is not enough to make a good product, it must the best possible.” Mr. Blengino goes on: “Last but not least, the aftersales service, we have understood with the first machine that MG stays behind his customers, they do not forget them after the sale. Programming the Touch Command to us was a total new thing and it was not simple, MG operators assisted and showed us the way to get the best from it. I like MG, they have walked in our shoes in the realization of this project”. In 2015 a WI FI remote has been installed on model MH 322 D, this compact electronic device, created by Delsy, measure the radius and let it be displayed directly on the Touch Command screen.
Massimo Roccia states: “It has been great to deal with  Britoil Offshore Services, Racca Impianti and Tomatis Lamiere, the relationship we had and that we are currently having with them is beyond the simple supplier/customer negotiation, with them there is real co-operation, exchanging of ideas, projects and point of views, and this is more than a mere selling. Honesty, respect and willing to get involved into new challenges, this is the ground where a new machine can be created, but not only a machine, we can create a working solution for our customers, a solution that can shorten and simplify their production.” In the last years MG has started the production of PH models, variable geometry, and leveler machines, a wider opportunity for users.

On March 7th Britoil Offshore Services has launched the second vessel, Britoil Energy.
Mr. David Hill says with pride: “We have been having a very challenging but exiting experience in the building of our PSV that are really an example of the highest performance, quality and comfort standard for our crews.”
MG promise is to be just around the corner for all its customers all over the world, wherever they are.