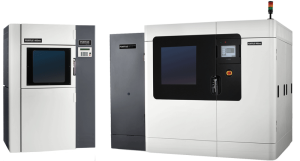 The main acquisition was a $700,000 Fortus 900 3D printer which is the largest in the world and the largest commercially-available machine in Australia. The high-tech Fortus printer compliments other printers that can print in plastics, nylons and derivatives of nylon and plastic, and also paper prototypes. They range in capacity from a small footprint of 300 millimetres by 300mm through to the Fortus 900 which prints a 600 millimetre by 900mm by 600mm envelope of product.

Mr Hermens said the 3D printing technology had sped up the process of moving the company’s new design ideas from the concept stage to fully functioning prototypes and even end-user products. While Keech is producing some end-user products with the equipment, at the moment it is mainly using it for prototyping and making patterns for the company’s Bendigo foundry. “Its genesis was in the need to be quicker and more adaptive as a foundry,” he said. “Foundries have traditionally been very slow to act because it takes so much investment to change with new patterns.” Mr Hermens said transforming new ideas into product had traditionally been a time-consuming and costly process, but 3D printing offered a much quicker and more flexible option than existing Computer Numerical Control (CNC) techniques.