Italy is represented with over 420 exhibitors in Dubai’s Big 5 construction industry fair. Turkey with more than 300 participants. Alongside Saudi Arabia, the country is the event’s official sponsor. Many are the reasons that lead Italians and Turks to invest in the Gulf, but the salespeople themselves claim trade with Arab countries and the promising local 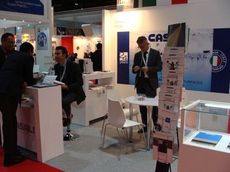 market are the primary drivers. Turkey’s Tensaform, a manufacturer of tensile membrane structures and constructions, has several contracts and projects underway in the Middle East and Asia, but it hasn’t made its way into the United Arab Emirates yet.

“We have clients in Qatar, Kuwait, Azerbaijan, Russia and Turkmenistan. We are doing well in the East, but not so in the West. The Middle East is an important and large market and we are looking to expand. We aren’t in the UAE yet, and we want to be there because our geographic location can help us compete here. We have a strong foothold in the East, but we are yet to break into the UAE, because the West is dominated by German and American companies,” said Tensaform projects manager Cüneyt Ayvaz.

The technical and commercial manager for Italy’s waterproofing and sports flooring manufacturer Casali, Antoine Melhem, said some countries in the region rank among the top trading partners of Italian industry, and remarks that companies like the oil company Eni and high-end items manufacturers have strong positions in the Gulf and in North Africa.

“Although we are in good standing with the Gulf, there is instability in the region, in countries like Syria and Libya, so we have prepared ourselves for these events. But trade relations between Italy and the region are very intensive. Italy has renowned couture designers, luxury and sports cars which the Gulf’s clients desire; Italian industry enjoys widespread recognition here. These close ties must be worked to our advantage,” Melhem said.

His view is shared by the export manager for Sipe Itália, Roberto Persi. The company makes cement mixers and hydraulic pumps, among other products. “Our history in dealing with the Arabs is what brings us to the UAE. We have strong brands and plants here. And we need to export. Prior to 2010, our company earned 50% of its revenue domestically. Now, it’s only 5%. It’s clear that we must work abroad,” he said.

Another Italian company, Euro-fer, places its bet on the UAE. Marketing manager Fabio Siriani says the company exports to several countries, but not the UAE. “We are looking for opportunities, including buyers and distributors. We want to increase our presence overseas, and this is an important place to be in,” he said. 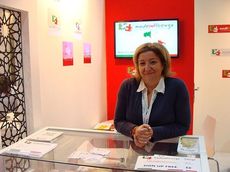 The company makes ornamental wrought iron for gates and staircases, and has clients in North Africa and the Middle East. Algeria is a key market for the company, which also sells to Qatar, Morocco and Lebanon. “The Italian crisis is milder now, we are industry leaders there and we ship product to all over the world, but we want new markets. We want to break into the UAE market,” Siriani explained.

The projects manager at the Vicenza Chamber of Commerce, Francesca Vitetta, claims Italy has a long-standing history of exploring foreign markets, and that it’s “natural” to seek clients abroad. She admits that the Gulf offers the greatest chances of success.

“Selling to other countries, going abroad is a very old characteristic. On the other hand, we want to be in touch with major buyers in the Gulf. And to us it’s very easy to ship product here. The logistics are simple,” she said. An item leaving Italy on board of a ship will arrive in Dubai in roughly seven days, according to Francesca.

The Turks also claim it’s easier for them to sell to the Middle East. This is why marble manufacturer Şimşekler is at the trade show. The UAE are its primary market, despite the fierce competition, especially with Italian businesses. The company’s export manager, Günseli Mahmutoğlu, claims Italians use more advanced industrial processes, but are unable to deliver the same prices. “We are very close to the Middle East, we have good prices and our product is really good.” 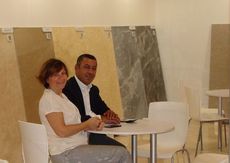 The company’s general manager, Hanif Şimşek, said business is suffering due to regional conflicts, which cause apprehension throughout the Middle East, particularly its two biggest markets: the UAE and Saudi Arabia. “Whenever new projects slowdown in these two places, companies all over the world suffer.”

Günseli forecasts a better future in the region, including localities that are now at war. “We also envision opportunities in the medium term. After all, the conflict in Syria will have to end eventually, and when that happens, there will be a new country to rebuild. It will be a brand new market,” he said.