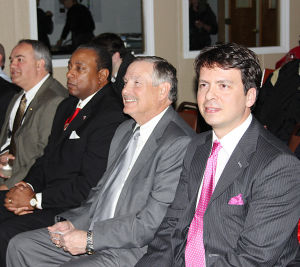 Euro Group has bought Tecumseh Products in Paris, Tennessee. The Italian industrial company that supplies electrical steel laminations to the makers of electric motors and generators plans to use Paris, Tennessee as its American base of operations. The name of the factory will change in Euro Tanciatura USA, or ETU. “We took ownership of the lamination division – said Matteo Fassio (on the right in the photo), managing director for ETU in Paris -.The winding and the assembly will stay with Tecumseh for the time being. We have an option to buy everything, including the building, within the next two years”. He also confirmed that the 68 workers in the division are currently employees of ETU and will that number growing in the future. “The plan is to grow to one hundred and eighty people within the next five years,” he said.

Nowadays, the company has operations on four continents and serves 500 customers, including companies like Bosch, Siemens and Cummins. Euro Group has identified 89 potential customers, and through its new Paris center, plans to target customers in industries like hermetic compressors, automotive, industrial motors, pumps, traction motors, oil and gas. In the next five years, the company hopes to triple its existing volume, achieve $60 million in sales and invest $8 million in the Paris operation.