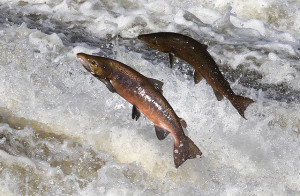 Fish sperm could be employed to extract and recycle rare earth elements (REEs) from used ore and electronic waste. This could provide a very natural, albeit strange, alternative to modern chemical-based extraction methods.

Current metal extraction methods are not exactly popular even in the industrial world because they are both costly – requiring complex waste-management – and also potentially harmful to the environment. That’s why environmentally conscious experts and industrial initiatives alike have been searching for many new alternatives, such as hydrometallurgy and even the new concept of “bio-mining,” which uses specialized bacteria to isolate elements for recycling. Strangely enough, the DNA components found in fish sperm may be the most promising option of all.

That’s at least according to a study recently published in the journal PLOS One, which details how a team of Japanese researchers led by Yoshio Takahashi at the University of Tokyo decided to start investigating how the phosphate sites of DNA play a crucial role in binding metal ions. In water, this process can help extract REEs so that they can be used once again in new electronics. Of course, DNA is not exactly the best extractor. That’s because it is a soluble, meaning that it will dissolve in water. However, salmon sperm, called milt, can deliver DNA to newly laid eggs in rivers around the world with no difficulty, making it an ideal form of protection. Milt also happens to be cheap and easy to acquire, as countless tons of it are discarded by the Japanese fishing industry each year.

So how does this all work? Takahashi and his colleagues created a milt powder than can be dropped into water-based solutions created from discarded tech metals. The researchers observed that when the milt hits the solution, valuable metal ions (REEs) are drawn straight to the phosphate sites in the milt DNA. The milt can then be recovered, and the REEs extracted.