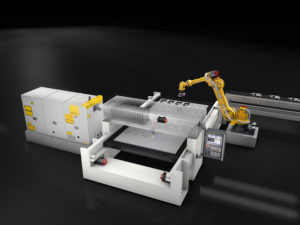 The most powerful laser currently is the Fanuc Fiber Laser FF 6000i Model A. Its power levels match the parallel range of CO2 lasers, so that an alternative is available for each power level and customers can choose between two technologies. The various modules of the fiber laser can be combined to achieve the power levels commonly in demand on the market.

The 30/31i-LB laser controllers are ideal for fly cutting. The “L” in the controller’s name indicates that it comes with specific features for the laser’s intended use, which considerably improves the cutting efficiency, intelligence and quality of laser machine tools. The external appearance and controls themselves are identical to all other CNC controllers from Fanuc. The CNC FS 30i-LB enables the control of up to 32 axes, 24 of them simultaneously. With 3D laser cutting this allows 5-axis operation, which is ideal for fiber lasers. The laser is not connected via the I/O link, but via the high-speed Fanuc Serial Servo Bus, or FSSB. Fly cutting requires low latency between signaling and execution – which is also achievable thanks to rapid connection via the Fanuc FSSB bus. The time needed in the laser controller is just microseconds. This makes it possible to achieve high fly cutting speeds, combined with high positioning accuracy.

The Fanuc fiber laser works with a wavelength of 1.070 µm. and from now laser machine manufacturers can also select individual modules for their specific application, and incorporate them in their machines.