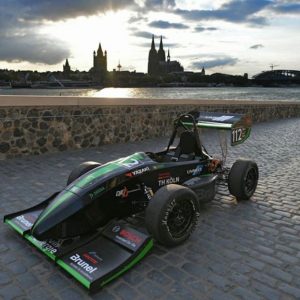 Electric vehicle “eMC16 elina” from Formula Student Team “eMotorsports Cologne” from the University of Applied Sciences Cologne attempted to break the Guinness world record for the highest vehicle speed inside a building in late January. The record attempt was measured in Hanover using the Kistler Correvit® SFII sensor.

Reaching speeds of more than 133 km/h
With the electric vehicle “eMC16 elina”, the eMC team and German professional race driver Lance David Arnold attempted to break the official Guinness world record for the highest speed inside a building. The most recent speed recorded by race judges in this category was 140km/h, which was achieved by Finnish rally driver Mikko Hirvonen in 2013 with a cross kart. This year’s experiment took place in the Messe Hanover’s exhibition halls 14 to 16. The halls are connected and provided an approximate total driving distance of 416 meters. The electric racing car reached its maximum speed of 133km/h at 310 meters. The team only had a limited amount of track on which to reach the record-breaking target speed, which added to the day’s excitement. “The limited track of 416 meters was certainly challenging, but not the main issue during the record attempt. The hall floors were tiled, which made it very difficult to gain enough traction. On the last attempt the driver did his best and started to break at 310 meters, which only gave him 106 meters to come to a complete standstill – without using ABS – after a maximum speed of 133km/h”, Fabian Lemme, Sales Automotive Vehicle Dynamics at Kistler, said. The speed record attempt was measured precisely using the Kistler Correvit® SFII sensor, which made an important contribution to the supervision of the record attempt.

Precise measurement data from the start
In any world record attempt that measures speed, one thousandth of a second can determine success or failure, and therefore it is imperative to use accurate measurement data. With more than 50 years of experience in the extreme range, Kistler is a strong and reliable partner for Formula Students teams, such as eMotorsports Cologne, as Fabian Lemme explains: “Without a sensor for measuring the distance, a world record attempt would be impossible. We have been supporting young Formula Student teams for a long time, and were delighted to take part in what was a truly groundbreaking event.”

Not only top-notch in racing
Correvit® sensors have been used in a number of world record attempts, such as the Academic Motorsports Association Zurich (AMZ) 2016 measurement for the Guinness World Record of the fastest 0-100 km/h acceleration in an electric vehicle. After just 1.513 seconds, the Correvit® SFII sensor measured the required mark of 100 km/h.

Apart from measuring world records, Kistler’s Correvit® SFII sensor is mainly used in racing due to its small and lightweight composition. Formula 1, DTM and other racing competitions use the non-contact optical sensor for high-precision, slip-free measurements of speed and distance. The Correvit® sensor permanently determines the current vehicle speed, which means that its results are more accurate than those measured using a light barrier, since this merely determines the average speed between two waypoints rather than the maximum speed reached.

TV team live on site
The world record attempt was initiated by the popular German TV series “auto mobil” by VOX, who filmed the entirety of the Cologne Formula Student Team’s world record attempt. The VOX team had already filmed the students during their preliminary tests at the airfield Mendig near Koblenz. To execute a world record, a number of components and tools are needed, including a sensor. The TV show’s measuring technology expert, who remembered the Correvit® sensor, approached Kistler and brought its Vehicle Dynamics team on board. In addition to the eMC team and the official race judge, Fabian Lemme also played an important role: “As a Kistler expert, I evaluated the measured data on my computer immediately after the record attempt and officially declared the final top speed.”