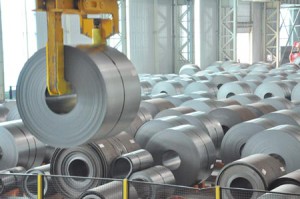 In August China’s steel output rose, shrugging off government-ordered shutdowns and increasing concerns that excess production in the world’s biggest supplier is swelling a global glut, as Bloomberg.com reports. Output of crude steel rose 1.7 percent to 66.94 million metric tons, according to data from the National Bureau of Statistics on Sunday. While production was up from July, it fell 3.5 percent from a year earlier and dropped 2 percent to 543.02 million tons in the first eight months, the bureau said. The country supplies more than half of the world’s steel.

“We still think there may be some slight improvement in domestic demand into the end of the year but that requires infrastructure activity to lift,” Lachlan Shaw, analyst at UBS Group AG, said by phone. “There is still a lot of steel being made because it is low cost, and there is the possibility for exports to grow even further.”

The global steel industry is struggling with record exports from China as excess supply spills onto world markets. Shipments in August were close to January’s record and 25 percent more than a year earlier, customs data show, spurring efforts by mills worldwide to stem the surge.