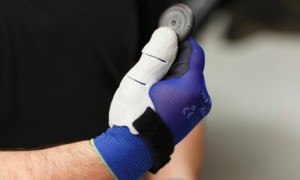 Each “thumb” is created as a custom orthotic device using a portable 3D camera, which captures the unique size and shape of each line-worker’s thumb. The scan is then used to build up a thumb guard made of a semi-flexible thermoplastic polyurethane plastic that flexes in a closed position. But because the structure is perfectly fitted to the wearer’s thumb the pieces lock into place when the digit is raised into a thumbs-up position. The locked splint resists strain and spreads the load of pushing something like a stiff rubber plug into holes in the car’s chassis – something that was causing pain and strain for production-line workers.

After small trials in the company’s Munich vehicle assembly plant yielded “very positive” feedback from workers, BMW is now looking to roll this and other schemes using custom built 3D-printed apparel to help production and prevent pain and injury. BMW has been using 3D printing techniques as part of its prototyping of parts and cars since 1989 with around 100,000 pieces created a year using a variety of different techniques at the Rapid Technology Centre in Munich.

This is not the first ergonomic aid BMW has created used 3D printing. The German automotive company created customised wheelchair seats for the British paralympic basketball team in 2012 using similar methods. The creation of the new thumb cots is part of a project at the Department of Ergonomics at the Technical University of Munich. Other projects have used 3D printing to replace limbs with cheap, adaptable prosthetics, along with a large number of other interesting objects and creations that were not possible using traditional manufacturing methods.