With a market and an industry living the recovery to a different extent, also the induced activities of the sector are called to accept new challenges that concern on one hand the ability of coming into contact with international production chains and on the other hand the capability of providing for a renovation of offer and productive technologies. 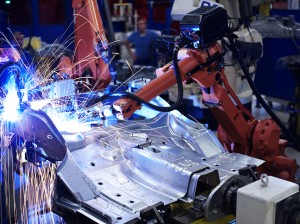 Determining the effective health state of the global automotive industry is not an easy enterprise, considering that its trend diverges depending on the geographical macro-regions or the Countries under examination. It derives from it that it is equally complicated defining a common denominator for the performances of its induced activities and especially of those parts of the production chain more strictly connected with the supply of steel and sheet metals. In Western nations, the figures concerning the production of cars on the two sides of Atlantic are for instance of opposite sign. If the current growth rates should remain constant, the United States panorama of the four wheels would face production volumes higher by 80% than those scored at the dawn of the great crisis, in 2009. The exact opposite is true for Europe, since here sales dropped to 12 million units against the over 16 millions in 2007. While a slice of the automotive companies finds oxygen in the turnovers deriving from low cost productions or the current low labour cost in Countries like Spain, others, such as Volkswagen Group, owe 60% of their current, and not so sound, fortunes to their high-end offer ranges. They travel instead at full speed the motors of China that, according to the national association of producers, counted 1.59 million cars sold just in September 2013, for a sequential growth of 21 points and a total of nearly 16 million registrations in the first nine months of this year. While India, which in the first semester lived the 4.7% volume drop and a flop of Suv is slowing down, others are the panoramas living a neat expansion or ready for a boom. Nissan is planning the establishing of a new plant worth 75 million dollars in Myanmar and more in general companies are looking at the Asian South East as the near future Eldorado. We have just to consider that in Indonesia the car trade has grown by 25% every year since 2011 and that however the car owners are only 45 out of 1,000 people against 450 out of 1,000 in Europe. Still Ihs has foreseen that the market can grow by 50% per year until 2018, if we sum Vietnam and Philippines.

So we get on the train of the global recovery

With a similar change of scenarios in course, it is clear that also the induced activities of the segment are called to a revolution. If we examine the dynamics of the demand and offer of steels in the main industrial Powers of Europe, we can notice that while the Italian steel and iron production for the automotive decreased by 7.1% between 2012 and 2013 in France things went even worse, with an output dropped by over 10 percentage points. The European Union in its whole scored +0.2% and the German driving engine went slightly better, with its +0.3%. Considering then the entire 2007-2013 period, differences become even more remarkable. If in fact the EU has lost 5.4% of the steel production, in relation to cars France and Italy have lost on the way 35.6 and 38,8% respectively, while looking at Germany that took off with its 7.2%. In terms of supplies and in particular of sheet metal machining, the growing competitive pressure urges players to try to enter global chains and at the same time to explore the innovation course. In the last decade the typology of the materials requested in the automotive sector has considerably changed. The need in fact of achieving safer and safer cars, while paying anyway constant attention to the weight reduction to decrease consumptions, has led manufacturers to use particular sheet metals. This evolution has obliged also the transformers and the makers of moulds, dies and equipment to face new challenges both in Italy and on the world stage. Nobler technologies and materials are in fact used more and more often. This has implied a rise of the tooling cost due to the growth of the purchase prices of materials, amounting even to 15-20 %, partly absorbed just by the adoption of new more efficient technologies.