We are presenting here the innovative results of the project concerning PVD hotwork coatings. 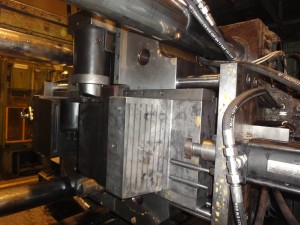 The working instruments and the dies for forming metal parts, especially in the HPDC (High Pressure Die casting) technology, are very complex components subjected to strong stresses. In those applications different failure mechanisms can therefore occur: thermal fatigue, cracking, abrasive wear, plastic deformation, transfer of die cast metal on the die surface. Those problems can cause frequent downtimes of productive lines. It is assessed on average a productivity decrease equal to at least 15%, which causes 15% of the volume of production rejects. This has naturally relevant economic and environmental implications related to the process, impact on the efficiency and on energy consumptions and on the consumption of raw materials. One of the most effective means to delay the soldering reaction provides for the modification of the surface characteristics of the die through coatings, heat treatments and surface reactions. In particular, the hard nano composite coatings based on nitrides or transition metal carbides can protect the surface against the erosion, the soldering and the other damaging mechanisms, thus improving the surface functionality and increasing the die service life by a 10 factor, at the same time drastically reducing the refrigeration and detaching agents. Over the last few years, they have developed the single layer, the multilayer and micro-structure gradients and nowadays, with chemical and stoichiometric tests of different coatings, they represent cutting-edge solutions in the coating technology. The modifications of the die surfaces result in an improvement of the resistance to wear and, consequently, they allow obtaining a reduction of costs in the forming process. This article is presenting the results of a study concerning two nanocomposite coatings (AlSiTiN and AlSiCrN) deposited on H11 steel and on nitride H11. Coatings have been analysed in terms of hardness, friction adhesion and resistance to wear at high temperatures (in this case equal to 450° C).

Fruit of a pan-European research

The coatings developed in the project ambit have been implemented by NT-Lab in Turin and by AIN. Such coatings, obtained through cathodic arc PVD, are called AlSiTiN multilayer and AlSiTiN gradient. Both are nanocomposites, constituted by a matrix of Si3N4 containing nanocrystals of AlTiN. Experience and literature indicate those materials as candidates with high potential for applications to tools for mechanical machining. The study has been carried out in the ambit of a European research project (Project acronym: “HOTWORK: Hot working tools and dies for forming metal parts”, MANUNET ERA – Net Project, Manunet transnational call 2009) in which took part as partner MIASA (Spain), 2A SpA Divisione Fonderie (Santena, Turin) , AIN (Asociación de la Industria Navarra – Center of Advanced Surface Engineering ) (Spain), Environment Park (Turin), CNR-IMAMOTER (Turin), NIS (Turin). The system consists of rotating cathodes, by means of which it is possible to obtain nano-structured coatings. In the specific case, the cathodes are made of AlSi and Ti, while nitrogen has been used as process gas. The material evaporation is obtained by means of an electric arc. Metals, under the form of ions, combine with nitrogen and deposit on the substrate (the cemented carbide, in this case). The temperature at which the deposition occurred is equal to 400°C. The other parameters that can be modulated are the current of arches and the intensity of magnetic fields, with the function of conveying the ion beam on the substrate, negatively charged. The concentration of AlSi and Ti depends on the current of arches, while the intensity of magnetic fields influences the deposition speed because the intensity is proportional to the quantity of ions per surface unit. If the field intensity is high, in fact, it occurs the production of numerous nucleation sites, which determine a high deposition speed. The latter is directly proportional to the dimension of nanocrystals inside the Si3N4 matrix. Coatings are alternatively of multilayer (a) and gradient (b) type and are schematized in the Figure number 1. In the multilayer case, a factorial plan has been implemented for the determination of the optimal number of layers. The total thickness of specimens has been kept constant and equal to 3 m. The gradient term indicates instead a difference in the ratio of AlSi and Ti concentrations. In the case of the multilayer coating, in a preliminary phase they prepared a good 40 specimens of K25 carbide for the execution of useful characterization tests for determining the optimal structure of the coating. The PVD (PLATIT) technology used in the Clean NT Lab represents the cathodic arc process in direct current. It actually allows obtaining high-energy metal ions (plasma state) by evaporation of cathodic sources positioned in the reactor chamber. The evaporated material is produced through electrical arches and combines with process gases (such as N2 and C2H2) and condenses on the substrate surface, thus giving shape to the desired substrate. The plant installed in the laboratory relies on two operational variants. The first consists in the LARC (Lateral Arc Rotating Cathodes) technology based on the concept of several rotating cathodes. That characteristic is unique of its kind and allows the coating of nanostuctured materials with variable and accurately controllable stoichiometry. The second is the so called Virtual Shutter device that, thanks to the action of magnetic fields, keeps the cathode clean during the rotation and grants the absence of macro particles and the high homogeneity of the coating. The different phases of the coating can be summarized as follows: ohmic preheating; depressurization; heating; ionic bombing (or etching); deposition (simple or composite); cooling and pressurization.

When the coating gets hard

All nanocomposite coatings show high hardness. AlSiTiN and AlSiCrN alloys in particular show comparable values on the different H11 and H13 substrates. Nitrided coatings are the cases with higher hardness in both. Good adhesion properties were anyway observed for all coatings. The thin layer deposited on the H11 substrate and above the nitrided layer shows the same type of yielding. At the beginning it is possible to observe some parallel cracks along the scratching channel and some internal chipping. Besides, at the beginning of the track it was not possible to detect any acoustic emission. AlSiCrN_H13 and AlSiTiN_H13 underwent the spallation of the interface at the edge of the track due to the scratching. The progressive propagation inside the track leads then to the complete final detachment. AlSiTiN, deposited on the H13 sample, presents the highest critical charge and the nitriding causes a decrease of the adhesion. Comparing the friction evolution, the deposited AlSiTiN alloy turned out to be the one with minor friction coefficient. The nitriding determines in fact an increment of the friction coefficient. If we compare the depth at the end of the tests at 5,000 and 15,000 revolutions, the thin AlSiCrN coating shows a high resistance in comparison with the AlSiTiN alloy in all the cases considered in this analysis. For this reason AlSiCrN has not lost the coating layer, at the end of all tests. Besides, it is worth pointing out that the depth is constant and homogeneous for all the traces due to wear. Nitrided materials feature higher resistance to wear; and this is a likely consequence of the higher hardness that they can boast in comparison with others. We have treated two nitrided inserts coated with AlTiSiN and two nitrided inserts coated with AlTiN and two die cavities with AlTiN treatment. The duration of the production process to which the pieces were subjected consists of 100,000 initial cycles, which allow highlighting the present modifications and defects. The result was however that the coated cavities did not show any improvement in comparison with untreated cavities; the inserts coated with AlTiN showed evident defects on the surface and, finally, the AlTiSiN coated inserts did not show any kind of defects. The test was then continued up to 175,000 cycles, then until the time in which inserts coated with AlTiN revealed to be so defective that their replacement became necessary. On the contrary AlTiSiN inserts were still in good conditions. Even at 175,000 cycles it was not possible to identify any difference between coated and uncoated cavities. At the end of something like 375,000 cycles AlTiSiN inserts and AlTiN cavities underwent some further inspections again. And they permitted to point out that in this case AlTiSiN inserts showed some surface defects. The comparison remained on the contrary unchanged for cavities. In short, it was observed that the life cycle of an insert nitrided and coated with AlTiN can approximately bear a total of 175,000 cycles. And, contextually, that the life cycle of an insert nitrided and coated with AlTiSiN approximately corresponds to 350,000 injection cycles. An aluminium injection die was composed by four parts differently treated (one part coated with CrN, one part coated with AlTiSiN and, at the bottom, the uncoated parts).

The advantages of the AlTiSiN coating

The AlTiSiN coated insert can provide a series of notable advantages, in terms of life, in comparison with the AlTiN coated insert. Nevertheless, it was deemed opportune to test as optimal coating, to be used for the treatment of die casting dies, the AlSiCrN coating (about 2.5 m) on both types of steel (H11 and H13). The reasons that have induced to this choice are the following: the high hardness, slightly inferior to AlSiTiN alloys; the good adhesion properties; the low friction coefficient, average if compared with the values obtained from other alloys but able to remain reasonably low; the very high resistance to wear, exceeding all other alloys proposed, including AlSiTiN. Among advantages and disadvantages, the minor hardness of the alloy has a secondary importance because, in spite of that, it maintains a high value, while the high resistance to wear has more relevance. The nitriding process can be advisable, even if its economic convenience should be assessed, due to its characteristic long duration (up to 72 hours). The nanostructured PVD coating in AlSiCrN, with thickness of about 2.5 m, executed on some matrixes with seal seats and on other parts of the die, has allowed drastically reducing the number of cracks on the same and, in some cases, totally eliminating them, together with the soldering problem. All that has led to a notable extension of the life of the die, or of parts of it, with all the mentioned advantages, like the reduction of production rejects. The executed PVD treatment has permitted a minor frequency of maintenance interventions, protecting the underlying steel layer from metallization and numerous extended cracks generated by thermal and mechanical fatigue. In particular the zone of the seal seat has not showed cracks or damaging phenomena neither at about 100,000 forming operations.