As well-known, moulds and dies are real “tools” subjected to noteworthy mechanical and physical-chemical stresses. The steels used for their manufacturing must therefore conform to precise requisites of resistance to thermal-chemical stresses and to wear. With the exception of stainless steels, which would deserve an analysis apart, the steels intended for making tools must be heat-treated with the target of increasing the protection level of surfaces and of reducing phenomena of precocious wear. One of the technological treatments most diffused on the market is certainly PVD (Physical Vapor Deposition), method that provides for the deposition of a thin layer of nitrides of binding elements with different qualities and functions. However, there are other treatments, perhaps less known but anyway not less efficacious. One of the most interesting is certainly nitriding, industrial process that assures the formation of very compact and hard nitrides on the manufactured item’s surface. 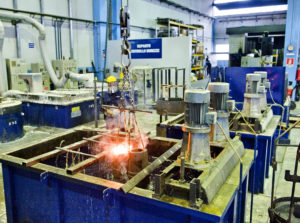 Among the different nitriding types, the so-called process of “ferritic nitrocarburizing” holds notable importance; it is a thermal-chemical treatment through which not only nitrogen but also carbon is diffused; the simultaneous coating of both elements allows further improving the resistance to mechanical and chemical wear, in its turn sharing in increasing the fatigue strength of the outer layer. If after such process a further phase, known with the initials QPQ (Quench Polish Quench), is carried out, the surface performances of steel can be even higher. To understand better the possibilities of this type of solution, we visited Franisa Tempra Acciai Speciali S.r.l., company that has installed in its factory at San Vittore Olona (MI) a process platform dedicated to both the ferritic nitrocarburizing and to QPQ. Stefano Semenzin, Area Manager Italia for Brondolin-Franisa Group, goes into detail: « QPQ is a process that can be performed in manifold variants, during which the tool is completely dipped inside a bath of liquid salt at low temperature: this allows the formation of a protective magnetite layer, through controlled oxidation, which is very homogeneous on all item surfaces. Magnetite contrasts the etching that aluminium oxides and more in general aggressive agents can unleash against the tool surface». This allows minimizing stuck weld phenomena in moulding and forming processes, both in the case of die-casting of light alloys and in the injection of thermosetting materials. Semenzin adds: « QPQ, basically, further increases hardness only on the surface, the smoothness and the resistance to corrosion of the tool; moreover, being an oxidation in salt baths, the surface becomes resistant to corrosion in saline mist, quality demanded to manufactured products that in their daily activity are affected by chemical corrosion».

The generated magnetite layer, besides being very resistant, is also very elastic: this feature makes the treatment suitable for tools of whatever shape and geometrical complexity; besides, it does not need preventive specific preparation of surfaces in terms of cleanliness and roughness. «The ferritic nitrocarburizing with QPQ –adds Semenzin – assures a surface hardness of tools of about 1000 HV; it increases the resistance to mechanical abrasion and chemical corrosion phenomena; it generates a cortical layer of nitro-carbides diffused on the surfaces of moulding/forming parts, i.e. those parts that are more subjected to wear. Therefore, it contrasts seizure phenomena, typical of sliding elements such as pins and ejectors».

Stefano Semenzin further explains: «Ferritic nitrocarburizing, coupled with the QPQ oxidation in salt bath, remains an important ally against the phenomena of precocious wear, and it is an increasingly indispensable protocol that allows facilitating manufacturing processes in the sector of aluminium alloy die casting, through the creation of a protection barrier». The so broadly used “chill vents” of steel 1.2343 are a real example of how the QPQ treatment contributes in reducing production times notably, avoiding useless machine downtimes caused by aluminium residues in tool opening phase. Stefano Semenzin ends: «Today QPQ is a valid solution to improve the service life of all tools in contact with alloys with low iron content; it can be used in the most complex projects concerning not only the die-casting world but also sectors where it is necessary that manufactured products feature surface properties of high added-value».

Nitriding is a thermal-chemical treatment of surface hardening that provides for the diffusion of nitrogen atoms inside the molecules of the surface of a steel component. Such diffusion can be generated by heat, that is to say through the permanence in an environment with temperatures between 480°C and 580°C, and for a period that can be of some hours (ferritic nitrocarburizing) or of some dozens of hours (nitriding in gas or ionic). In the case of gaseous nitriding, the process occurs through the aid of gaseous ammonia; in the case of ionic nitriding, nitrogen at the plasma state is instead used; finally, concerning the ferritic nitrocarburizing, known also as salt nitriding, parts are immersed into baths of molten salts with cyanate or cyanide base in low percentage. In the latter case, the treatment time is equal to about 1/3 compared to previous processes.

It is worth underlining that the QPQ oxidation can be repeated several times and cyclically, according to the wear degree of the tool; therefore, it can be widely used for the activities of tool maintenance and regeneration, too. Semenzin adds: «QPQ is a treatment that aids users to reduce the maintenance costs for moulding and forming equipment; the treated surface does not need a mechanical recovery of quotas, since it has a very low thickness, of around 2 microns. This allows complying with dimensional tolerances and remaining within the “manufacturing protocol”, without actually changing the parameters of the treated component. Anyway, the treated surface can be machined on stock removal machines if necessary».