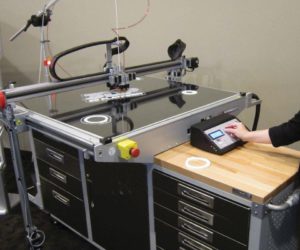 Born from PBC Linear, manufacturer of linear motion components actuators and motors offer its Workbench 3D printer with a printing build volume of 1 × 1 × 0.5 meter. The machine’s SurePrint servo technology enables print layer resolution a low as 70 microns for a range of materials including ABS, Nylon and others. Plus, a folding gantry enables the machine to fit through a standard-sized door.

This machine can be used for a variety of applications for printing prototypes, production parts, artwork and sculptures, and personalized items commonly derived from 3D scans often used in the medical, fashion, education and entertainment industries. That said, machine shops can also use it to print jigs, fixtures and other components. In fact, 3DP has done that for its own in-house production needs.

For example, the company printed the profile rail wiper shown to the right for one of its machine tools. Although that machine has built-in rail surface wipers that push big steel chips off the rail surfaces, the wiper failed to catch smaller pieces that can be caught in between the rail and the ball bearing system, causing the ball bearing system to fail prematurely. The printed rail wiper added to the machine keeps small chips off the rail while helping retain oil and lubrication in the rail bearings.