A research and education work about the issues of safety and corporate social responsibility has characterized a significant part of the recent activity by assofond and it is going to absorb its energies in the future, astride further studies and in-depth analysis workshops.

Besides the financial allocations for the purchase of new machines and technologies able to lead it towards Industry 4.0, today the Italian foundry needs to invest in human resources. As stated the president of the industrial association Assofond, Roberto Ariotti, while introducing the Guide Document for the risk assessment and the health monitoring in foundries, drawn up in collaboration with Brescia University. Ariotti referred to human capital defining it as the «added-value that allows our enterprises to maintain high competitiveness levels» despite the context where they operate. In other words, in spite of «economic situations that hinder Italy Country in comparison with the States where our main European and international competitors operate, owing to the higher costs of the main manufacturing factors». This capital must be then protected and favoured by the optimal conditions to deploy the professionalism that characterizes the over 27,000 employees in the national foundry industry, generating about 1% of the Gross Domestic Product. To succeed in it, with the support of an academic team directed by Professor Stefano Porru, the guide-document can be very useful, as it details the various fundamental stages. First, the definition of the state-of-the-art of the risk assessment and of the health surveillance in cast iron foundries; then the identification of the good practices combined with the drawing up of opportune operational recommendations. Moreover, the promotion of «a multidisciplinary approach» that involves a variety of all-round corporate functions and the diffusion of culture about the prevention of professional accidents and diseases.

Expanding the number of companies 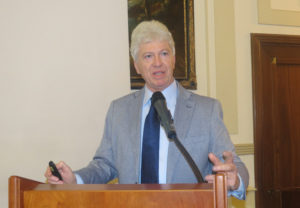 «It is a matter connected with the concepts of corporate social responsibility», the manager of the Technical Service of Assofond, Gualtiero Corelli, told «and with the sustainability of the relationships between management and workers and between companies and external world». As Corelli pointed out, the sustainability reportof the Sector, recently published, mainly focused on the corporate atmosphere, believing that interpersonal relations and their sometimes delicate balances can influence in their turn the management of workers’ protection. «Certainly – then he added, foundries are no longer the ugly, dirty and badenvironments where they worked in the past but it is known that some prejudices take a long time to die out.  It is possible to discredit them widening the number of companies taking part in studies, to generate knowledge». For cycles of three years and still in collaboration with Leonessa, university, the association is committed to researches about accidents and injuries, to go on with the risk assessment and the health protection, in compliance with medical protocols drawn up in the light of the most recent scientific evidences. «Nowadays», the technical service manager anticipated, «the intent is promoting the protocol concerning the specific activities of the foundry industry and the substances used, as proposed in the guide document. Protocol based on concrete experiences and evidences and for this reason it was preceded by a technical investigation that allowed highlighting with precision the risks connected with the various types of plants, and applicable and implementable according to the various situations».

To each his risk 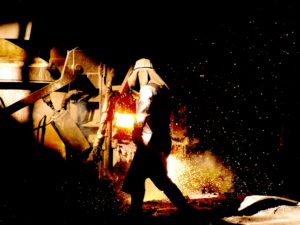 Coherently, the document on the cast iron working (field that employs about 11,000 workers) has then examined almost all categories of workers, subdivided according to their tasks. From modelling to casting plant management, from the collection of castings up to the painting of cores and finishing procedures. It has associated one or more potential sources of danger to each of them. From the exposure to noise and vibrations up to the possible interaction with ionizing, and non-ionizing agents, to carcinogenic particles. Recalling the titles of the legislative decree 81 dated 2008, which «lead to most of the working situations that characterize production cycles in foundry», Assofond has summarized the risk affecting the labour force in various classes. From those of physical, chemical, biologic, ergonomic and psychosocial nature up to the ones more strictly concerning safety. Since 2008, the latter have been analysed in various stages, gradually taking into account the influence of work environments and equipment; the eventual use of chemical products and, last but least, the responsibility towards third parties. «All the advantages of the awareness-rising strategies accomplished in the light of the activity of professor Porru», further explained Gualtiero Corelli, «were evident. Frequency and seriousness of accidents, depending on professions, have neatly decreased in time. The credit goes also to the overall vision adopted to frame the problem. We did not just focus on the technical measures worth implementing on machines and plants but on the entire all-round foundry eco-system. Essential, from this point of view, was the contribution by physicians who, on the theme, expressed important clinic and scientific evaluations».

Such a wide-ranging investigation unavoidably concerns also the internal organization of cast iron foundries. Beyond the more or less striking accident case histories, there are pathologies that undermine the attention needed for the execution of particular tasks or activities. Therefore, once assessed the anomaly, prerogative of the management should be to entrust the concerned subjects with different tasks, providing for a redefinition of roles in the department. «Ours is perhaps an original and unusual point of view compared with others, more consolidated», it is the opinion of Gualtiero Corelli, «but we deem it winning because the management itself of activities and therefore of employees themselves is in itself favourable for safety». The policies suggested for an efficacious risk management strategy include also those pertaining to the electromagnetic pollution, even if the theme can be considered marginal and maybe more felt where induction furnaces are in operation. However, it is possible that the advent of smart and super-connected factories of the fourth industrial revolution can encompass also this kind of emissions in the agenda of research. However, what today matters is that attention and awareness of foundry professionals’ protection are growing. «We had the opportunity of collaborating with at least thirty sector companies», ended Corelli, «which represent a very significant sample for us. Besides, we could ascertain how the theme is topical and arouses interest. A zero-accident foundry perhaps remains a mirage and it is undoubtedly the target to be pursued but there are improvements and they are well-proven. The high road worth consolidating is always increasing the budgets invested in prevention and education actions».

A RECORD-CALL FOR WORK SAFETY

As it was opportunely reported also by Aneas – the Italian Association of experts and operators for health and safety in workplaces – Inail has made available a sum of almost 370 million Euros for the companies that intend to invest in safety. It is the highest amount among those provided for by Isi call, promoted for the first time in 2010 and able, in nine years, to deliver an approximate total of two billion Euros. The funding is a non-repayable loan and to enjoy it, it is necessary to fill in modules that, according to sources, should be published and accessible from next 11thApril to 30thMay on the Internet site of the National Institute for Insurance against Accidents at Work. The same pages contain the official regulation for the participation in the initiative. According to the president of Inail, Massimo De Felice, projects like Isi call are unique on a European scale. The target for the future is then «simplifying the procedure as much as possible: to aid companies in the identification of the interventions for which to apply for incentives, to optimize the use of funds and to increase the participation». Already today, in line with what reminded by the General Director Giuseppe Lucibello, the number of beneficiary companies has grown, because «the new mechanism of redistribution of resources allocated but not assigned introduced last year has allowed a bigger number of companies to benefit from funds». Besides, the «considerable increase of funds made available by the 2018-call, will allow us to support an even higher number, with positive effects on workers’ health and safety and consequently also on the welfare and society system». Aneas underlined how the Isi 2018 call is subdivided into five so-called Axes and each of them has specific prerogatives and application fields; therefore, it addresses only some typologies of enterprises and not others. Moreover, the Institute specified that «the contribution will be paid in capital account and can cover up to 65% of the expenses borne for each admitted project, according to the parameters and the minimum and maximum amounts specified by the call for each funding axis». In comparison with the recent past, finally, «the main novelty is represented by the introduction by the funding sub-axis worth two million Euros, specifically dedicated to projects for the adoption of organizational and social responsibility models, to increase significantly the diffusion of these preventive interventions».