A new researchers by the University of Alicante Adhesion and Adhesives Laboratory is working on developing a new flexible polymeric material capable of self-repairing. The material, a type of transparent resin, has the property of healing itself; for example, when it is cut with scissors in half and put back in contact, it rejoins itself within 10-15 seconds without using any external source. 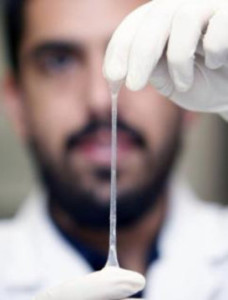 Another feature of this material is that the cutting-joining process can be performed in water or in any other fluid substance. “This property is a novelty all over the world that gives way to the development of different materials for their applications in sectors such as medicine, cosmetics, space industry, automotive, and many others,” as stated the three researchers, authors of the finding, José Miguel Martín, professor of Inorganic Chemistry, Jose Antonio Jofre, chemical and industrial engineer, and chemist Andrés Yanez. “Just to give an example, catheters for internal use in medicine would be possible with this material, so if it broken inside a human body to immobilize a person for a few seconds would be enough for this material to self-heal, as they explained. Also, the material has shape memory, which means that even if it is crushed and kneaded, it recovers its original shape in a few seconds.

According to UA researchers, “the valuable features of the new material are due to its lack of chemical reaction, which prevents its alteration and turns it into a biocompatible mass, that is, accepted by the whole body.” This is a worldwide novelty that could be applied in various fields such as medicine, cosmetics, aerospace and automotive.