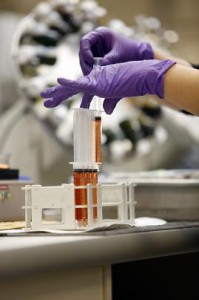 Oil contamination was identified as an important cause of machinery failure, according to leading drives and controls manufacturer, Bosch Rexroth. Between 70 and 80 per cent of all hydraulic failures, which can lead to machinery failure, can be traced back to contaminated oil.

The warning has been issued due to increasing concerns that engineers continue to rely on component monitoring as a means of early detection of machinery problems. Experts at Bosch Rexroth believe that only 20 per cent of all unplanned downtime can be identified through component monitoring with oil analysis a more reliable option.

“The origins of any contamination can vary,” says Chris Gray, an expert in oil contamination at Bosch Rexroth. “Contamination can be built-in during the manufacturing process, such as welding residue, or it can be external contamination entering via piston rods or poor seals and vents. It can even be generated during the working life of a drive via seal abrasion or chemical erosion. 70 to 80 per cent of hydraulic drive failures are caused by contaminated oil. Lubricant analysis is therefore a vital part of modern maintenance and servicing.” He continued: “Focused monitoring of oil cleanliness and conducting oil analysis provides information on the condition of the operating medium at an early stage and thus contributes to preventing expensive repairs, downtimes and unnecessary oil changes. Extended oil intervals cut costs in the short run, but in the long term, they increase the risk of damage caused by oil degradation.”

However, there remain concerns that oil analysis is not forming part of the regular machinery servicing schedule. “For many maintenance and production engineers there simply isn’t the time and manpower to conduct the regular checks needed to identify problems before it becomes too late,” says Mr Gray. “This can lead to a whole host of problems, such as valve and pump failure, which can result in unplanned machinery downtime and potentially costly repairs or the need to replace components entirely.”